Ok, technically only 86 since I started plugging this site and writing regularly, but every little bit counts, right? I just want to say thanks all for reading, this has been a lot of fun for me, and hopefully it’s been a lot of fun for you, and here’s to a bunch more down the road. I thought I’d celebrate my first milestone by doing my top 10 favorite albums of all time. This is by no means a “THESE ARE THE BEST EVER” list, this is just “These are my top 10 favorite albums as a person”.

And the winner in the category of “Pick I’m Most Likely to Take Shit For” is…the 2003 Revival Cast version of the musical Little Shop of Horrors. I used to be a pretty major theater kid, and I still throw on a few select show recordings if I’m in the mood. Little Shop is pretty much my favorite show; it’s dark, it’s funny, and it doesn’t take itself obnoxiously seriously (ahem). And the music is awesome; gracefully aging doo-wop, funk, and lots of harmonies. I sang some of it on stage in high school (top row, far left), and I still sing along with it now. 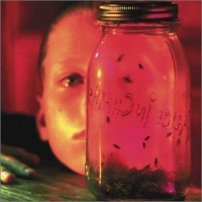 Imagine: You’ve been on a long tour promoting your newest, possibly most loved, album. You toured the world. You went on Lollapalooza. You got back home and found an eviction notice on your door because you didn’t pay your rent. Your lead singer has a heroin addiction. You go into the studio almost to avoid being homeless.

Such is the story of Jar of Flies, written and recorded in a week. This EP manages to be a perfect mix of sadness and depression, yet there’s a beauty about it. It’s in Mike Inez’s bass riff on “Rotten Apple”. The oddly joyous chorus of “No Excuses”. The late Layne Staley’s voice on “Nutshell”. It’s as if the band is telling you things suck, but we all know what that’s like, and we’re here. It’s perfect music for a day filled with bad news. And speaking of bad news…

A perfect example of my favorite album being totally different from what’s best. I will always maintain that The Moon & Antarctica is Modest Mouse’s crowning work, but I’ve gotten way more mileage off of Good News. I have to be in a special set of circumstances to love The Moon & Antarctica, but I can pop Good News in any time, any day of the week and enjoy it. A rarity for Modest Mouse, most of Good News is pretty accessible; the opening trifecta of “The World At Large”, “Float On”, and “Ocean Breathes Salty” is perfect pick-up-and-play indie rock. Even if it’s not the better album, it’s definitely more enjoyable; soft songs like “Blame It On the Tetons” counteract louder tunes like “Black Cadillacs”, and Issac Brock’s lyrics do more than show why he’s one of the best songwriters of our day. I could certainly use more news like this.

Another case where “favorite” and “best” diverge. Yes, The Downward Spiral will probably always be remembered as Trent Reznor’s one-in-a-million masterpiece, and I have nothing but good thoughts towards it, but Year Zero was actually my first NIN album, and the first electronic album I ever bought. There’s a lot of different sounds; rockier stuff like “The Beginning of the End” and “Capital G”, but total electronic showstoppers like “Vessel” and “In This Twilight” that go somewhere else entirely. And it’s not an all around downer like most of NIN’s output, I mean, it’s not upbeat, but it’s not “I am sad, so very, very, sad” music, either. And unlike a lot of the other albums on this list, Year Zero is still fairly low key in the music community, which is kinda refreshing.

Have you ever had a moment while listening to new music when suddenly everything just clicks, and you say, without any hesitation, “I love this”? About five minutes into opener “Teen Age Riot”, when that hyperactive riff kicks back in, I knew I was a Sonic Youth fan. Daydream Nation is the sound of a band at it’s creative peak; at times a whirlwind of detuned, frantic rock (“Silver Rocket”), and at other times, it’s completely beautiful (the fadeout of “The Sprawl”). It’s pretty much all of Sonic Youth’s qualities with only the positive sides showing; the poetic lyrics, loads of riffs and ideas, and ambition a plenty. It’s probably the weirdest album on the list, but I definitely suggest checking it out, you might be surprised.

This post is super long already, part 2 to come later!

I enjoy music and music culture; I hope you do, too.
View all posts by bgibs122 →
This entry was posted in "Thoughts", Lists and tagged albums, Alice in Chains, Little Shop of Horrors, modest mouse, music, nine inch nails, sonic youth. Bookmark the permalink.