Music videos are times for artists to cut loose and have fun, put on a spectacle, or tell a story.

*Note: Click the clip below the title to watch the video, and there are video spoilers within the write-ups, so watch then read for full effect. 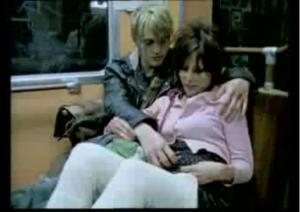 The video for “Try, Try, Try” was released in the (initial) band’s final days, when the Pumpkins really had no one left to impress. This Jonas Akerlund directed video follows a homeless couple around Sweden. Over the course of the first few minutes, we learn that 1. They’re in love, 2. The woman is very pregnant, and 3. Being homeless doesn’t mean you can’t have an awesome jacket.

“I was able to buy the jacket, but had to skimp in other areas. Like food.”

Oh, and Jonas Akerlund, the director? You might have seen some his more recent work.

Why so sad?
The main distinction between “Fuckin’ Perfect”‘s video and the usual “Gosh, teenager girls have it rough” video shows up when it cuts to an anorexic girl on a scale, and the video officially leaves “Beautiful” in the dust once it jumps to the same girl in a bathtub dilluted with her own blood and “Perfect” carved in her arm. The rest of the video shows that things got better for her, but what makes “Fuckin’ Perfect” stay with you is how realistically they play the entire scene. It’s not  like”Firework”, where everyone (even the Littlest Cancer Patient) is pretty and stand-out gorgeous; “Fuckin’ Perfect” is almost uncomfortably realistic.

We can’t have a list of “music that makes you an emotional wreck” without mentioning Radiohead. Unlike the previous entries, which hid their sadness for a minute or two, “All I Need” gets right to business. Through split-screen, we follow the day of two boys; one affluent in a first world country, the other is a hemisphere away in less ideal conditions. The split works very effectively; we see the affluent boy wake up leisurely, have breakfast, and a full day at school while the Asian boy is kicked awake, splashes his face, and goes to work in a sweatshop. The affluent boy has a full lunch, his counterpart sips from a bowl. But just you wait.

Why so sad?
Oh, by the way, the video was made for MTV’s “EXIT: End Exploitation and Trafficking” campaign. The video zooms in to show that all this time, the Asian boy has been making shoes. After playing soccer, the affluent boy takes his shoes off, and we’re given this image.

Anyone who’s ever bought clothing ever officially feels bad.

First of all, I’m sorry that half the song got censored out, so click here for some lyrics. The video begins with the titular Stan showing the Bieliebers a thing or two about fan obsession by bleaching his hair to look more like his idol, Eminem, and lashing out at his girlfriend when she calls him by his name. We then find out that Stan’s basement is plastered with more pictures of his favorite artist than a 16 year old’s Tumblr as Stan writes Eminem a letter.

Why so sad?
It’s hard to pinpoint exactly when this one turns creepy (ok, considering that smile Stan has when he sees the success of his blond-job, creepier) , but the Angry Man-Child Face that Stan makes around 3:22 (seen above) is just as good a place as any. There’s a shot of blood on a magazine as Stan says “Sometimes I even cut myself to see how much it bleeds”, and then he tapes a picture of Slim over his girlfriend in a photo of theirs.

The video officially freaks out as Stan raps the last verse while driving drunk on a bridge while his girlfriend is tied up in the trunk. There’s interspersed footage of him outright demolishing his Shrine to Shady, before the car crashes over a cliff. The last verse of the song plays as we watch the aftermath of the incident, but there’s really two eerie moments. First off, we see that Stan bleached his younger brother’s hair, too. A little unsettling in itself, but the way it’s revealed and the sheer surprise of it are what put it into “Holy shit, get this guy help” territory. Then this is one of the last shots in the video.

There’s no real way to lead into why this one’s sad. Shot seven months before Cash’s death, the video for “Hurt” has become Cash’s epitaph. There’s no tricks to this video, and that’s what makes it so haunting; no split-screen, no emotional sucker punch in the last minute, just Cash. Cash in his frail last days, his invincible youth, and his empire of dirt.

Why so sad?
Aside from everything else just mentioned above, the video for “Hurt” is sad because Cash looks and acts like a man who knows his end is near. With the life he led, it’s a small wonder that Cash even made it as far as he did, and he knows that. I’ve tried to separate the videos from the music  for most of this list, but here, it’s impossible to have one without the other, especially because of how they both build in their final moments.

“Little Motel”‘s video actually begins very cutely with a mom tucking her small child into bed at a motel. It’s not until around fifty seconds in that the video reveals itself to be shot in reverse, but even then it’s pretty monotonous: the mom checks into the hotel, drives around with the sleeping child, gets gas…hell, it’s almost kinda sweet.

Why so sad?
The exact moment where shit starts going south is when the camera looks at a plate of pancakes arranged like a smiling monkey. 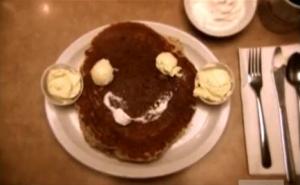 Then goes to this.

The mother looks like she’s about to lose it, and pretty soon so will you. We cut to a flashback (still shown in reverse) of the mother and child playing happily in a park. The video then jumps back to the present, where the mom is running out of a hospital while carrying the child.

The rest of the video’s pretty stacked from there, but the definitive rip-your-heart-out moment is when the child’s heart monitor goes from flatlined to active and you remember that this video is in reverse. Even though it’s revealed to be because she pulled his monitors off, the next images of a tear rolling up the mother’s cheek, and her making a crayon drawing don’t help. The kid was sick and probably dying, so instead of leaving the child in a cold hospital bed, she tucked him in one last time.

Have a good day!

I enjoy music and music culture; I hope you do, too.
View all posts by bgibs122 →
This entry was posted in Lists and tagged All I Need, eminem, fuckin perfect, Hurt, Johnny Cash, list, Little Motel, modest mouse, music videos, pink, radiohead, sad, Stan, the smashing pumpkins, Try Try Try. Bookmark the permalink.