Hello, and welcome to Radio Rants! You know, it’s been a nice week at the Ranting About Music office. The past couple of Radio Rants have had new some new faces, and I’ve been able to talk about not just one, but two great new bands. Keeping it fresh has never been so ea–

Fucking SERIOUSLY!? No, you know what? I won’t do it. I’ve reviewed so much Katy Perry that I’m past the point of complaining about complaining about her. I’m not going to touch “Part of Me” unless it’s the number one song on the Hot 100, the song perched up top above al– 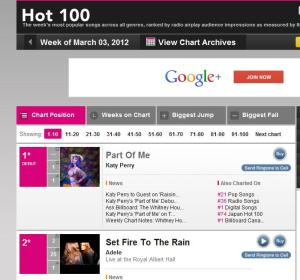 I guess I can’t be too shocked at this. Katy Perry’s not the one that got away, no, she’s the one that won’t go away. At this point, what annoys me about her more than anything else is that I don’t especially love or, unbelievable as it sounds, hate her. On a song-to-song basis I enjoy her at best and dislike her at worst, but I’ve never had a sustained reaction to her as an artist.

Well, let’s get the obvious out of the way first: Dr. Luke and Max Martin produced this thing, didn’t they? That damn chorus “whoosh” effect, the processed rock band instrumentation, additional synths in the chorus and second verse, and the “Every beat is a kick in the head” drum beat wouldn’t be used by anyone but those two. More than anything else, “Part of Me” sounds like a rougher version of “Teenage Dream”, although that could just be because “Teenage Dream”, “California Gurls”, “The One That Got Away“, and now “Part of Me” have very similar productions. Here, the music is working overtime to pump you up to the point of oppression, which is especially weird when you examine the lyrics.

In fact, let’s see here…we’re dealing with Katy Perry. Katy “Do you ever feel like a plastic bag”, “Think I need a ginger ale/That was such an epic fail” “I wanna see your pea-cock-cock-cock” Perry. There’s gotta be some stupid lyrics in here somewhere.

“You chewed me up and spit me out/Like I was poison in your mouth” Did something about this metaphor not quite make it to anyone else? Normally, I spit poison out at first taste, or don’t put it in my mouth at all (try harder, Pitchfork). But I know that’s a nitpick.

“This is the part of me that you’re never gonna ever take away from me/Throw your stick and stones/Your bombs and your blows/But you’re not gonna break my soul” It seems that Katy Perry has entered the “Break up with me and I will have one hell of a song for it” arena. Such an open market. Anyway, we have some determination, and sticks, stones, bombs, and blows are all throwable things. What the hell? This Katy Perry chorus makes sense.

“So you can keep the diamond ring/It don’t mean nothing anyway/In fact you can keep everything/Except for me” Holy shit that’s a burn! Honestly, aside from minor nitpicks for the sake of nitpicks, I can’t find any fault with the lyrics of “Part of Me”.

I feel like I could complain about Perry’s voice, but it feels like a waste of time at this point. Yes, in studio her voice gets layered and treated enough that her annoying warble only shows at the start of the song, and yes she leans hard on her backing vocalists live, but here, it almost works. “Part of Me” has a distressed tone, so in a way, her voice kind of works here.

Yet, despite all that, I still feel like there’s something about “Part of Me” that gives me the wrong impression. I think that while, absolutely it’s a valid and great expression of post-divorce trauma, it also still feels just enough like a revenge fantasy in that it’s a little too picturesque to be realistic. But, much more than that, my problem with this song is the damn mix. I mentioned earlier that the beat felt like getting kicked in the head, and even on low volume settings, it’s harsh and headache inducing. Add in that all the elements sound like they’re trying to out-loud each other, and you have a song that’s rendered nearly unlistenable. Even against “Born This Way”.

Which is a shame because, at the end of the day, I don’t hate this. It’s far from perfect, but well-written and Perry sounds pretty good. Too bad that Dr. Luke’s production is more intent on selling records with catchy hooks than letting the song speak for itself. Where’s the Tylenol?

I enjoy music and music culture; I hope you do, too.
View all posts by bgibs122 →
This entry was posted in Radio Rants and tagged katy perry, music, Part of Me, pop, review. Bookmark the permalink.