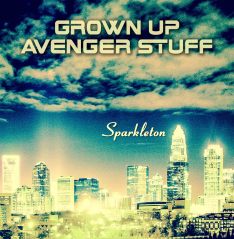 A friend of mine created a music nerd-friendly car game: find a phrase that would make a good name for a rock band, and then describe what that band would sound like. During our first outing, we described would-be bands like “Hopeful Future”, “Midas”, and “The Shamblers”. I only mention this, because none of us would have come up with a name like “Grown Up Avenger Stuff”, or what that would even sound like. But around three minutes into Sparkleton opener “Some of Us”, you realize you don’t know what to call what you’re hearing, but you know you want to hear more.

Sparkleton, the newest offering from the Charlotte, North Carolina group, shines. It benefits from being the group’s third release since 2010; their sound is fully formed, and polished without losing any of its punch. The chemistry between the members is another high point; not only is everyone solid on their instruments, they know how to work together to make music that doesn’t quite sound like anyone else. Their sound could be described as high-concept garage rock; even with fairly intricate arrangements and dynamic guitar-bass-drum instrumentation, it always sounds like three people playing without a lot of studio interference.

And then there is the band’s biggest weapon: vocalist Deirdre Kroener. Her stage presence even on record is powerful (see: the coda for “Pins”), she can belt it out, work out some innovative phrasing, or straight up howl depending on what the moment calls for. And yes, “moment” is the operative word there; just like the rest of the band, Kroener can snap from contained to chaotic as a particular song rises and falls. Her no matter how she’s singing, she comes across as playfully taunting, and like she’s having fun–quite reminiscent of Karen O. during Yeah Yeah Yeahs’ early years (Fever to Tell and earlier; that early).

The YYYs’ comparison is an easy one to make for GUAS, but the art-punks never played as big as Sparkleton gets. The lumbering title track is the slowest of the bunch, but goes for anthem instead of malaise, and still changes shape enough that it never slows down. Grown Up Avenger Stuff’ rhythm section consists of bassist Hunter Thomsen and drummer Tyler Thomsen, and the steady basslines and rapid-fire drumming carry the momentum forward on every song. Their most interesting take comes on “The Beat”, which packs more energy than a pep band. The vamp comes straight from a drumline, but then takes a hard left into a guitar-induced freakout with Kroener teasing “The beat!” over it. Her mile a minute vocals in the verses come out cheerleader-style before returning to a slower style over the song’s extended outro. “The Beat” is a great entry point for anyone looking to taste what GUAS is capable of.

There’s something about the pulsing bass and propulsive drumming on “Pins” that makes it sound like a single as well. Boasting one of the album’s catchiest melodies for it’s first section, some of Kroener’s most impassioned singing in the second, and some truly unrestrained instrument work for the outro, “Pins” is a definite highlight. A little darker and more focused, “The Man” exists as an effective cooldown between “Pins” and “Too Cool”, the longest track on Sparkleton. It starts fairly light with some blues-tinged guitar and bass and the requisite dynamic shifts, but the extended break of “You’re too cool, too cool, too cool for me” involves some pretty guitar work, even with distortion. And then, the song finishes with a furious minute of sheer punk aggression.

“Do Ya”, the album closer, can’t help but sound slight after “Too Cool”‘s onslaught, and for the once, the band’s build doesn’t build to much beyond a Queens of the Stone Age-esque riff session to close the song and album out. It’s not a bad song, but a baffling end to an album that ventured all over.

Sparkleton‘s only seven songs, but it still feels fully formed. The band’s alt rock status isn’t made by cherrypicking their own record collections, but from the music that they love to make. None of the songs feel like filler, or too similar to each other, and they’re fun to revisit on their own, or as part of the whole album–there’s always something new to find. Grown Up Avenger Stuff is on album number three, and I hope there’s plenty more where that came from.

I enjoy music and music culture; I hope you do, too.
View all posts by bgibs122 →
This entry was posted in Album Reviews, New Music and tagged album, alternative rock, Grown Up Avenger Stuff, indie, new music, review, Sparkleton. Bookmark the permalink.