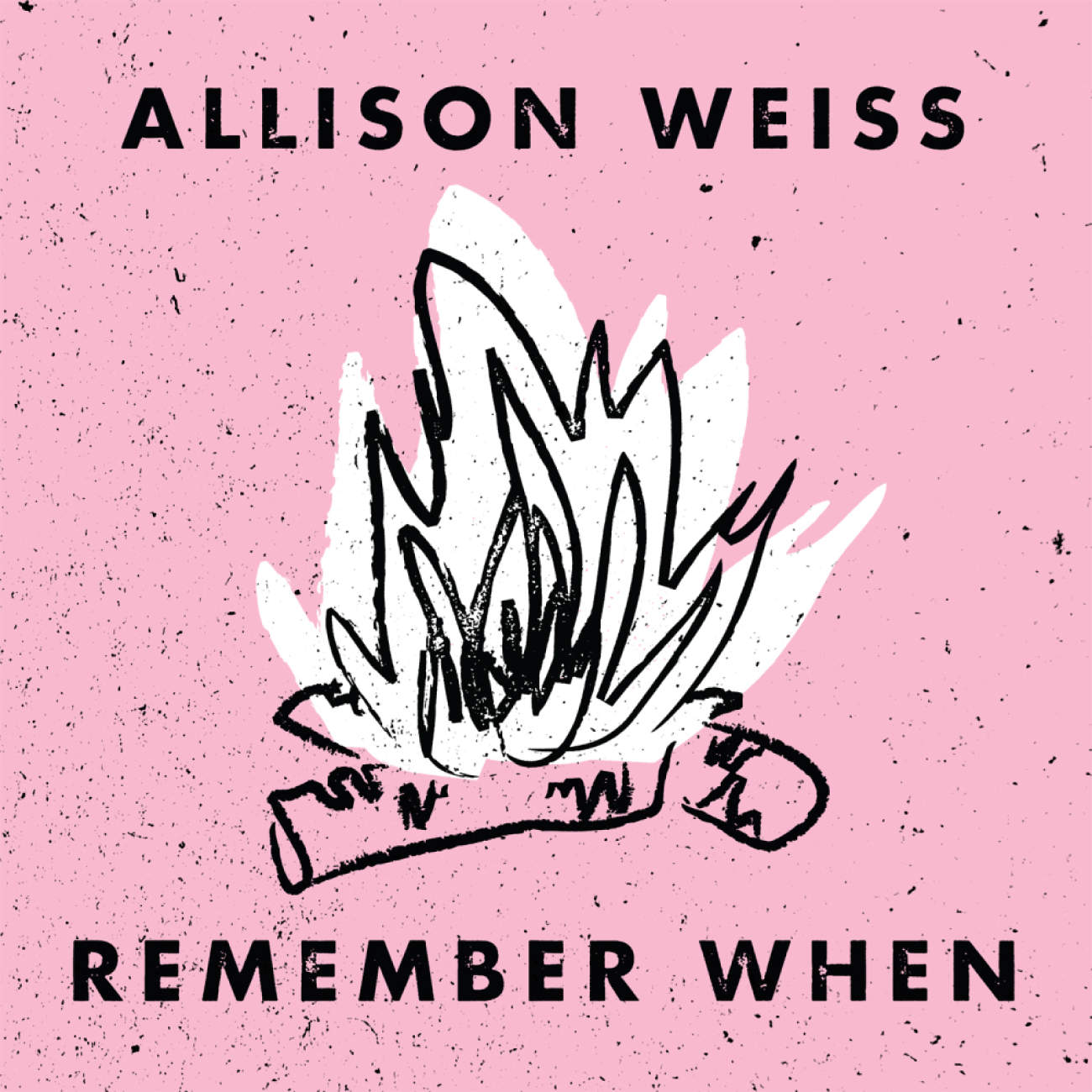 Allison Weiss – Remember When
It’s always great to hear an artist hit their stride on a record the way Weiss did with Say What You Mean, but it always leads to a tricky question: what next? Weiss has filled the year since her adored pop-punk/power-pop album with a few tours, and moving cross country, feeling a little reflective along the way. Remember When, her new five song EP, was inspired by the same events that birthed large parts of Say What You Mean, but approaches them with a bit of distance. Even though the record is about the same subject matter, the different perspective makes it rewarding on its own merits.

Part of that is because Remember When feels like the product of a self-imposed writing workshop. “Cerebral” isn’t a word usually associated with a genre that has galloping chords and freewheeling drums like power-pop does, but it describes someone like Weiss, who’s always been brainier than you’d think at first. Even her rambunctious songs had clever details like minor synth riffs or extra guitar licks tucked away; Remember When seems based around bringing those details to the forefront. It achieves this by slowing the songs themselves, while still sounding as intense. The effect is an EP that smolders instead of explodes.

Take something like”The Fall”, where the bass and guitar riffs flirt around each other for the verses and only connect in the chorus. Despite being fairly intricate, all the moving parts to the song work together as a whole for a tone that’s ponderous while still being likable and catchy (and who among us can’t relate to “We used to make such a great team/But I was looking for love/and we were 18/you didn’t know what you wanted/But I wanted you”?). Other stand out, “Giving Up” puts a killer melody to that moment when you knew everything in a relationship was hopelessly broken. It’s an absolutely understated track; the palm-muted guitar brings an edge of dread, but with the punchy drums and Weiss’ layered vocals, it’s still lively.

Five songs seems to be the right amount for Remember When. The title track leads off the EP with momentum that recalls Say What You Mean, although it still sounds a little more textured like the material here. Weiss’ take on Robyn’s “Call Your Girlfriend”, built around Jeff Buckley-style clean guitar, shows the human heart at the center of the glitchy electropop original. And it’s hard not to crack a smile at hearing the song covered this way. The only stumble is on closer “Take You Back”. It’s not without its charms as an intimate acoustic number, but the full band burst finishing the song sounds forced and doesn’t go anywhere before petering it.  But even then, a last second stumble isn’t enough to throw off the whole routine. Remember When is a great listen from an artist who hit their stride, and is finding out what comes next.

Aaron West and the Roaring Twenties – We Don’t Have Each Other
For anyone else, a concept album character study about a man losing everything from his sobriety to his father to his lover would be an ambitious, even a daunting task. Then, you remember that Aaron West mastermind Dan “Soupy” Campbell’s day job is leading pop punk juggernaut The Wonder Years, whose self-referential discography includes multiple albums with recurring themes and musical suites, and suddenly We Don’t Have Each Other seems like scaling down.

With Aaron West and the Roaring Twenties, it seems that Campbell’s out to make the next Great American Novel: The Album. Instead of The Wonder Years’ towering riffs and over-caffeinated rush, We Don’t Have Each Other has an acoustic, almost alt country sound. The first song released was “Divorce and the American South”, a gentle plea from Aaron West to his wife backed only by an acoustic guitar. Outside of other quiet moment “Get Me Out of Here Alive”, We Don’t Have Each Other is a surprisingly full album with bass, fuzzy electric guitar, drums, and horns. And the songs don’t always stay quiet; “Grapefruit”, “St. Joe Keep Us Safe”, and “You Ain’t No Saint” eventually hit cathartic heights that sound even bigger because of their unassuming beginnings. The full band sound puts Aaron West and the Roaring Twenties closer to Americana sounding bands like The Hold Steady, rather than a Warped Tour acoustic stage act.

But the real focus of We Don’t Have Each Other is Campbell’s songwriting. His articulation can get lost in the high flying, emotionally overcharged music of The Wonder Years, but here, he writes scenes and character sketches instead of journal entries. He seldom tells us outright how Aaron’s feeling, and instead places us right next to him as he experiences the loneliness of a shared apartment in the start of a divorce, or drives from New York City to Georgia to start over. On one hand, it’s a little heavy on “I did this, so I did that” style narration, but the scenes are interesting and well done enough for it to get by.

What looks good on paper doesn’t always have flawless execution, though. The first four songs on the record are pretty great with standout melodies and solid arrangements, but the record meanders a bit with “Divorce And the American South” after the ramshackle on the road anthem “Running Scared”. Ambition only gets the better of the album once, but it happens on a crucial moment with “The Thunderbird Inn”; the song doesn’t hit a musical stride, and can’t commit to either of its lyrical themes. It throws off the momentum of the album’s more somber back half that can’t even be rallied by “You Ain’t No Saint”. The closing cover of The Mountain Goats’ “Going to Georgia” is a great thematic choice as a closer, though. The idea behind We Don’t Have Each Other is compelling, and Campbell’s intermittent victories justify the finished, if uneven, product.

Youth Culture is Rockwell’s new sideproject that he bills as the darker side to the more positive bend of his main band, pop-punk comeups Mixtapes. It’s an understandable, if not drastic difference; if Mixtapes is about putting on a bright, determined face in spite of, well, life, then Youth Culture acknowledges that a brave face and #pma don’t solve everything. It’s less of a dark record, and more of a dissatisfied one.

Youth Culture also sounds like what you would expect from a Mixtapes side project. YC’s sound is still based in Mixtapes’ hyperkintetic, shout-along pop-punk that isn’t above playing with song structures; with minor tweaks, “Serious Business”, “I’m (actually) Sorry”, “Guns and Candy”, and “Thieves Guild” could sneak into Mixtapes’ setlists without anyone noticing. Elsewhere, Rockwell includes ideas you can tell he’s always wanted to try, but never been able to with his main gig, like the whistle/clap combo on “We Live”, or blatantly synthy strings of “American Songs”. And despite the down-on-yrself vibe of the album, I Hate How Normal I’ve Become has a looser feel than Mixtapes.

IHHNIB is a mix of ok to good songs with two gems in the middle. “Tell Me About Your Blog” (which includes a title drop) is a mission statement for the album that’s backed by sharp lyrics and catchy melodies throughout, while next song “Grocery Store” throws that same dissatisfaction through a pair of tempo changes and the best barbershop quartet breakdown you’re likely going to hear all year. And it’s touches like that, or the Rick Ross line in “Tell Me About Your Blog”, or the yoga mats/McRib joke in “We Live” that makes I Hate How Normal I’ve Become worth it: underneath all the reflection, Rockwell still has time to crack a joke.

I enjoy music and music culture; I hope you do, too.
View all posts by bgibs122 →
This entry was posted in Album Reviews and tagged Aaron West and the Roaring Twenties, album, Allison Weiss, I Hate How Normal I've Become, music, punk, Remember When, review, We Don't Have Each Other, Youth Culture. Bookmark the permalink.