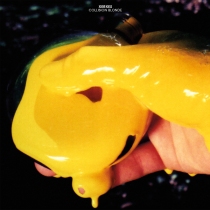 For how much the internet laments that each of us is supposedly disappearing down our own music rabbit holes, there are more and more bands these days branching out of their niche subgenres, and making work that appeals to a variety of tastes. To wit, Louisville based hardcore group Xerxes, with their new album Collision Blonde.

Xerxes is a hardcore band by definition, and while there’s no way to dispute that, you can’t help but think there’s something evolved about Collision Blonde at the same time. Hardcore’s famous low-end is still present (and thicker, thanks to clearer production); it pushes the dread on opener “I Was Wrong” to the boiling point, and the menacing “Knife” is defined by its tom-tom heavy sound, feedback squalls, and teeth-grinding bassline. The musical tension that snakes through the entire album was present–but not as fleshed out–on the band’s more traditional hardcore release Would You Understand? Here, even though nothing gets as fast as “Grinstead”, Collision Blonde has an intensity that dwarfs its relatively short (28 minute) runtime.

As I was saying, Collision Blonde feels like more than “just” a hardcore album, in no small way because of its guitar parts. More frequently than not, the guitar sounds like shoegaze resisting submission cut with noise rock level urgency; think the guitars on Deafhaven’s Sunbather cut with some The Cure in for texture, and you’re just about there. They show up in proper freakout mode with “Criminal, Animal” and “A Toast”, the first two fully structured songs here, establishing a mood for the entire album. “A Toast”, in particular, is a standout cut; the bass and guitar feature an honest to God hook at first, then the song becomes a rising spoken word breakdown, and finally exploding into a thirty second onslaught of tortured screams and furious playing that doesn’t just sound huge, but oddly catchy. It’s the kind of thing you can’t play quietly.

In addition to micro bursts clocking under or around two and a half minutes, Collision Blonde has a few slowburners. The goth rock-tinged title track stretches out for four tense minutes at mid tempo, alternating between (relatively) light drum and bass grooves and intermittent guitar explosions, with the vocals being the only constant. It’s a solid demonstration that Xerxes can make longer songs work. Four and a half minute closer “Nosedive” reigns in some of the experimentation for one last hardcore workout; there are a few dynamics at work and some deft drumming and feedback, but the song sounds restrained throughout with a dash of dread before ending on a repeating coda of “Can’t make it stop” and feedback. Other experiments include “Use As Directed” and “(but here we are)”: the former is a drum and harmonic soundscape with quiet spoken vocals over distant screamed ones, a neat bit of studio work. The latter is more fully formed instrumentally, but the mumbled monologue doesn’t latch onto anything substantial. It’s a cool idea, I’m just not sure if I like the execution.

But there’s plenty I like about Collision Blonde overall. The title track and “A Toast” are both top notch, and “Knife” and “Chestnut Street” lead the charge on a number of other solid tracks. As is the case for most hardcore, the vocals are going to be the make or break for anyone unfamiliar with the genre, but Xerxes’ throat shredding, barrel chested roar is actually less abrasive than most, and some varied deliveries make this fairly accessible for the genre. It’s an ideal record for reaching punk or alternative rock fans looking to dip into another subgenre; there’s enough traditional hardcore here to give you a taste, but enough that’ll sound familiar to just about anyone to make Collision Blonde sound inviting. Bring the kids, it’ll be fun. Xerxes get it right: just because your album is an intense work of existential anguish, it can’t be infinitely listenable at the same time.

I enjoy music and music culture; I hope you do, too.
View all posts by bgibs122 →
This entry was posted in Album Reviews, New Music and tagged album, hardcore, music, New, punk, review, Xerxes. Bookmark the permalink.