You Should See Them Live: Will Butler and Cloud Nothings at Woodward Theater

Indie rock doesn’t come through Cincinnati that often, so when I saw that Will Butler and Cloud Nothings were playing at the Woodward Theater in the city’s Over the Rhine district, I immediately made plans to go. It’s been a few months since I saw someone live, and figured hey, since I’ve never been to Woodward, the whole thing’ll be a new experience, so why not?

Woodward was entertaining as a venue. It’s a smaller place, but very much a “venue” and not a “rock club”. Sure, it’s got a bar, stage, and a balcony, but there was an air of cleanliness and culture to it. My beer (they have a slew of Cincinnati craft beers canned and on tap) came in real pint glass instead of a plastic cup. The walls were white. Most of the shows I go to are in rock clubs that revel in their own grime, bars that happen to have a small upstairs/stage, or a stadium. Woodward was different, and kinda novel for it. 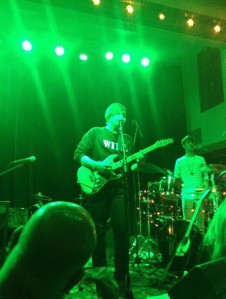 Will Butler’s one of the multi-instrumentalists in indie rock juggernaut Arcade Fire (far right here, jumping between a synth and keyboard) who released his debut solo album Policy this past Tuesday. Policy–and Butler as an artist overall–puts a high value in off the cuff spontaneity and zaniness, both of which translated to his live show. For Butler and his backing band–a drummer and a pair of synth/keyboard players–the stage was almost a playground; everyone moved between synths, guitars, keyboards, and live drums/drum machine between songs. It’s entirely possible none of the ten song setlist (Policy in full, plus two songs from Butler’s project for The Guardian) used the exact same setup, which is pretty entertaining.

It helped that Policy is a live-friendly record. The punchier numbers like jangley, power chord workout garage rock strut of “Take My Side” and glammed up piano stomper “Witness” were there in proper form, and the slapstick standout rocker “What I Want” was made even more fun by hearing its wailing backing vocals and “I know this great recipe for pony macaroni!” live. But, the biggest two highlights came from where the live show deviated from the album: “Something’s Coming”, a shambling art-rock cut on the LP, found a deeper groove live, and between its heavy low-end and rhythmic vocals, veered into LCD Soundsystem territory. “Sing to Me” was still a somber piano number live, but added slash and burn synths and cymbal crashes over its climax, a surprising but satisfying way to finish the night’s most low-key moment. It’s not super likely Policy is going to end up on a lot of year-end lists, but a copy ended up in my hands that night, and it isn’t leaving rotation anytime soon.

Cloud Nothings are a Cleveland (yay Ohio! Boo Cleveland!) trio who I’m honestly beating myself up for not investigating before. They’ve been on my “list of bands to check out” since their widely regarded album Attack on Memory, and I finally caught up with last year’s Here and Nowhere Else during year-end listings. The band specializes in loud, fast, cathartic rock songs whose hallmarks are dynamic guitar riffs (as seen here) and high-cardio drumming. The band’s set started with “Now Here In”, and they blasted through most of Here and Nowhere Else and Attack on Memory with barely so much as a pause between songs. Dylan Baldi stopped once to thank everyone for coming instead of watching Empire (yay Empire! Boo most other Fox shows!) And the material and performances were strong enough that there was basically no need to throw off the momentum; why pause between “Quieter Today” and “Pattern Walks” any longer than the last chords need to ring?

Trying to parse the differences between Cloud Nothings’ live set and how the songs appear on the albums feels like a trite exercise. I’m not enough of a gearhead to get into the particulars, but it sounds like the rig guitarist Dylan Baldi used to record Here and Nowhere Else has become his live one, as well; the album’s wiry, fuzzy gnarled sound ran through Woodward, whether the song was “Giving Into Seeing”” or the band’s (relative term here) big hit “Stay Useless”. The only difference was a beefed up sound the Attack on Memory cuts, and maybe more graceful dynamic jumps on stuff like “Psychic Trauma”.

The undisputed highlight of the night was “I’m Not Part of Me”, hands down Cloud Nothings’ best song, and the one that got everyone in the theater moving. It was the moment where the night’s frantic, dashed together rock and roll hit transcendence, and life felt kind of complete for a bit while you and strangers screamed “You’re a part of me!” in each other’s faces. It felt jubilant. And so, while this was my first time at a new venue with a pair of artists I hadn’t seen before, I sure wouldn’t mind going back. Maybe get one or two more local beers. Emphasis on “one or two”, though; shit’s pricey.

I enjoy music and music culture; I hope you do, too.
View all posts by bgibs122 →
This entry was posted in Uncategorized and tagged Cincinnati, cloud nothings, indie rock, live music, music, musicnow, will butler. Bookmark the permalink.