Last year, I went to Bunbury for a day and wrote about it. This year, I’m doing all three!

After a last minuteish decision to get the Saturday pass for Cincinnati’s Bunbury last year, I resolved I’d go back and do the thing right this time around. Bunbury takes place at Sawyer Point right on the Ohio River, and if it’s going to be there, I told myself, so was I. Three day pass. Go the whole time. Cleared schedule, full days, can’t lose.

And at least for Day One, my plan was mostly successful. I wasn’t able to get inside for Wussy’s 2:30 set, but they at least soundtracked the line at the gate nicely, so I’m still counting it as something I heard. Anyway, once I got my three day bracelet (that I’ve been picking at ever since), and the obligatory carding over with, I was ready to start the day!

Markham/Machine Heart/Indigo Wild
I feel for bands that get the early slots at festivals, especially on the first day. It’s like when you plan to meet up with a friend, and they’re running late but their friend Ryan is already there, so if you two wanna find each other they’ll just catch up to you, that’s cool. It’s not that you’re against talking to Ryan, he’s friendly and all, but it’s probably not a day-maker, or why you’re there. Meandering between Markham, Machine Heart, and Indigo Wild felt like you and Ryan shooting the shit about beer or jobs: loose fun and a good time, but nothing too memorable. Of the three bands, Machine Heart’s poppy take on Metric style synth rock clicked with me the most, and any band whose singer uses a sheer cape gets extra respect points in my book. Markham and Indigo Wild were both young, eager, and watchable, so hey, at least in this metaphor, Ryan and I had some common interests.

Father John Misty
Ugh, Father John Misty. I have so many complicated feelings about this dude. On one hand, I Love You, Honeybear is a wonderfully made, incredibly melodic album. On the other hand, his whole persona is a meta-douchebag whose schticky satire fails to land because it’s unfunny, pretentious, and is less satire than pushing bullshit with a sardonic “fuck me, right?” grin (I’m aware this is a minority opinion, but oh well).

So who gave this asshole the right to have my favorite set of the day? All the standard press cuts from FJM live shows applied: he runs around the stage! He shakes his hips as much as Marina Diamandis! He’s actually funny (sample quotes: “Bunbury! How ya doing?! …Are you ready for that? For someone asking you how you’re doing every hour? You’re the most looked-after people in Cincinnati.” and “[referencing himself] It’s too hot to be dressed like a waiter at the Olive Garden”)! But the biggest draw was the show itself. FJM is ostensibly a folk act with orchestral flourishes in-studio, but that turned into hard-nosed rock live; for instance, the chamber pop of “I Love You, Honeybear” turned into bluesy glam on stage. And it was a transition that fit; you wouldn’t expect the electro-tinged “True Affection” to work live, but it was a standout. A fiery set completed capped with an intense take on “Hollywood Forever Cemetery Sings” and “The Ideal Husband” made me a fan in spite of myself.

Regardless of any other feelings, Father John Misty’s place in Bunbury’s cracked me up since it was announced. He played the main stage at 4:00, not a bad slot by any means, but one clearly selected before I Love You, Honeybear blew up the way it did. You look at the fact that he was before Bleachers and competing with like, Temples, and it just seems like the kind of thing he’d laugh at.

Catfish and the Bottlemen
CatB played the River Stage, which is a space on Cincinnati’s Serpentine Wall tooled into an amphitheater while the crowd sits on the stairs. A friend and I were so far down the side of the wall that we were at a complete side view of the stage. From that angle, I made the following observations: 1. Huh, it’s kind of hard to hear at this angle, 2. dressing in all black tells people you’re in a band, but you’re not in, like, a big band, 3. Catfish’s lead singer sounds enjoyably Julian Casablancas-y, and 4. people from England saying “Cincinnati” is really funny. My friend and I talked about tattoos or whatever.

Bleachers
Bleachers is the side project of fun. guitarist (and the unfortunately named) Jack Antonoff. I listened to their album Strange Desire a few times last year, and liked it more than just about anything I’ve heard from fun.: the music’s got an 80’s arena rock throwback vibe and a likable dorky-kid charm that makes songs like “Rollercoaster” and “Reckless Love” a blast to hear live.

Their only problem right now is material. Bleachers was slotted for an hour. Their only album is 39 minutes long, and two songs didn’t appear (Grimes featuring “Take Me Away” and “I’m Ready to Move On” with Yoko Ono). The band supplemented their material with a spirited cover of Fleetwood Mac’s “Go Your Own Way”, an instrumental break to introduce the band, a dueling guitar/saxophone solo, and an extended intro to “I Wanna Get Better”, but so much padding at the hottest point of the day felt suffocating. It did make closer “I Wanna Get Better” feel earned, though. 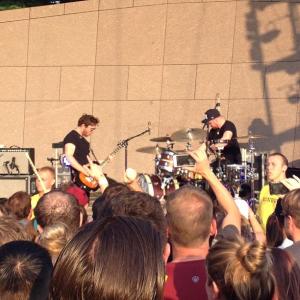 For my part, Royal Blood kept me occupied while I waited 20 people deep in line for a water fountain. Which brings me to something that I haven’t had to touch on yet: the setup for Bunbury as a festival is doesn’t make a lot of sense. After 5:00, there were only two staging areas left, and only one was active at a time. Hypothetically, this meant an artist had a full audience, but in practicality, it means reenacting The Lion King stampede scene through bottlenecked walkways because so help me if I don’t get a good spot for The Black Keys. What’s more, at least on Friday they undershot the number of food tents booths and water stations. Apparently, they ran out of bottled water around 7:30, which is around the same time my body decided that Coors Light was no longer close enough to water, and I had to get the real thing, hence leaving my group for the Mad Max style line. I eventually got water, complete with some light rain to celebrate, and caught the end of Royal Blood.

And here’s where everything went off plan.

Tame Impala
A talking point for my group all day had been sure, all of us liked Tame Impala, but had zero qualms about leaving them early for a good spot for The Black Keys. As I saw more and more Black Keys shirts through the day, I started bargaining with myself; “leaving early” turned into “half the set”, and so on. Our group split in half for a possible food/Black Keys stage recon run across the grounds. The food lines made us decide food wasn’t worth it, and the sea of humanity amassing near the main stage made us decide Tame Impala was probably not worth it. So, we doubled back to Tame, where we didn’t find the other half the of our group, but saw plenty of hippies swaying in a thunderstorm to what was either “Let It Happen” or “Mind Mischief”. It was cool music with a cool stage, but we decided fuck it, and lit out for the Keys. We might have done two or three laps of the grounds in fifteen minutes, but felt like we only went backwards. 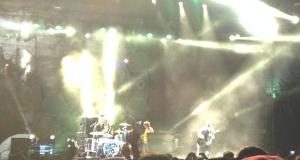 The Black Keys
An hour waiting in a downpour gives you time to reflect. One of those thoughts might be “My kingdom for an umbrella”, but another recurring thought was that The Black Keys are an ideal festival band. They’ve got a slew of instantly recognizable material with punchy enough album cuts to match, and everything’s going to have a groove to it. They could have come out, played “Tighten Up”, “Lonely Boy”, “Gold on the Ceiling”, “Gotta Get Away”, “Howlin’ For You”, tossed in a throwback or two, and some of the stronger Brothers/El Camino songs, and the crowd would have gone nuts.

Which is more or less what happened. The band launched into “Dead and Gone”, followed it up with “Next Girl”, and away we went. The set drew heavily from Brothers and El Camino with choice picks from Attack & Release and Turn Blue and a pair of pre-Danger Mouse cuts (“Your Touch” from Magic Potion and “Leavin’ Trunk” from The Big Comeup). It was probably the least surprising set I’d seen all day, but that didn’t make “Strange Times” or “Money Maker” any less fun. I noticed a few times songs were played under their standard tempo (“Fever” in particular), possibly due to Patrick Carney’s shoulder injury earlier this year, but Dan Auerbach went above and beyond in his solos. By the last ringing notes of “Little Black Submarines”, all felt right. I even felt a little dried off.

I enjoy music and music culture; I hope you do, too.
View all posts by bgibs122 →
This entry was posted in "Thoughts" and tagged Bleachers, Bunbury, Cincinnati, Father John Misty, friday, Matt and Kim, music, music festival, Tame Impala, The Black Keys. Bookmark the permalink.