Album Review: Florence and the Machine – How Big, How Blue, How Beautiful 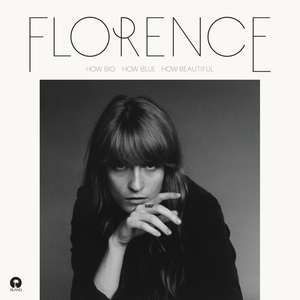 It’s fun to see what kind of images you can extrapolate from a band name, and how close those images match those of the band in real life. It’s a bit of a hobby for me. For Florence and the Machine, I’ve hit upon the idea that “the machine” in question is a gun or a cannon; some elaborate construct meant to ready, aim, and fire Florence Welch’s massive voice for maximum effect.

And, if Welch is your singer, that’s not a bad place to be; there might be singers out there with bigger ranges, but few as ready or willing to throw themselves at a track. This was basically the crux of 2011’s Ceremonials, where the band functioned as an artillery unit while Welch aimed as broad and as far as possible. It was an exhilarating if kind of exhausting album by design, and it would be hard to imagine going even bigger four years later.

Thankfully, How Big, How Blue, How Beautiful (album title aside) doesn’t try to outsize Ceremonials. That’s not to say that it doesn’t frequently swing big, but when it stacks vocal takes, drum tracks, and horns on songs such as “What Kind of Man” or “Third Eye”, there’s a deftness to it compared to the lumbering nature of “Only If For a Night” and “Seven Devils”. The songcraft here is more involved than Ceremonials or Lungs, and the melodies sound more intricate. You get the feeling that if Lungs was about establishing a sound and Ceremonials was about playing that sound as broad as possible, HBHBHB is about, if not necessarily shrinking, then tightening and developing what’s been touched on before.

For example, look at guitars. Prominent guitars have been mostly absent from Florence’s output despite their presence on the band’s break out single, but they come roaring back on HBHBHB. The vicious riff on “What Kind of Man” is one of the song’s defining features (it’s also the heaviest Florence has ever sounded), and “Mother” works a rubbery guitar line into its chorus. Elsewhere, guitars make the rhythmic backbone of “Ships to Wreck” and “Queen of Peace” while “Various Storms & Saints” starts with the bluesy guitar from “Girl With One Eye” and takes it to a more ornate place instead of a blues freakout. And that illustrates the growth from Lungs to now: instead of a blaring, out of control finish, this is a tightly controlled album whose songs end in smartly made climaxes (see: the title track).

But, not every song follows the standard Florence formula for big finishes. Classic rock workout “Ship to Wreck” keeps its energy level pretty consistent over a galloping four minute runtime, while the floating, ethereal “Long & Lost” is more of a goth rock interlude than full-fledged song. Meanwhile, “Caught” plays up the gospel influence that’s always existed in the band’s margins, and is one of the album’s best slowburners. A large part of why the album works is because Welch and the band focus on melodies and control. For as great as Welch is at throwing herself at a track, material like”Long & Lost”, the title track or the utterly gorgeous “St. Jude” is better because she holds some of the power back while still using her broad range. This makes the times that the band does go into overdrive (“Queen of Peace”, “Third Eye”, “Delilah”) sound even more dynamic.

How Big, How Blue, How Beautiful splits some of the difference between the variety on Lungs and the scope of Ceremonials for something more consistent than the former and more stable than the latter. It feels sustainable in a way the band never has before; although the songs have gotten more personal as Welch disclosed to Billboard, they sound more grounded and user-friendly than they have in the past. The drawback is that consistency, even of a high quality, can sound slight as it does with “Various Storms & Saints” and “Long & Lost”, and the record lacks a “Cosmic Love”/”No Light, No Light”-style centerpiece. Still, though, How Big, How Blue, How Beautiful is a solid, highly replayable art rock album that starts their transition from upstarts to institution. Fire at will, four stars out of five.

tl;dr: Florence and the Machine make their brightest album yet with How Big, How Blue, How Beautiful, 4/5.

I enjoy music and music culture; I hope you do, too.
View all posts by bgibs122 →
This entry was posted in Album Reviews and tagged album, alternative rock, florence + the machine, Florence and the Machine, How Big How Blue How Beautiful, music, review, rock. Bookmark the permalink.