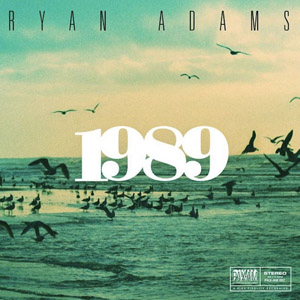 There are some releases that feel inevitable, and some that, even on repeated listens, still inspire a dull amusement that, holy shit, this actually exists. Ryan Adams’ version of Taylor Swift’s 1989, an album that’s spent the last week in ubiquity despite not existing in an ethereal or corporeal form in July, is firmly the latter.While  most musical endeavors are an end result of “anything can happen”, 198Adams (I gotta find a better abbreviation) is an end result of a very specific chain of actions.

For starters, Ryan Adams is exactly the sort of fringe lifer who could make this project happen in its best possible form. Adams is an insanely prolific songwriter; in addition to his workaholic solo discography, there are a litany of EPs, and even a number of straight up lost albums out there. Dude will start in on something like a “sci-fi metal concept album” or “three songs with Johnny Depp”, and, not only it will be made so, but it will be done because that will be what he genuinely wants to do. So, when starts posting fairly complete (and enticing) clips of Taylor Swift songs and says he’s gonna do it in full, there is a very real chance that this might actually happen.

Of course, Taylor Swift is largely responsible for RY989‘ release as well, and not just because they’re her songs. Support for Adams was as broad as it was immediate, but Swift campaigned loudest and hardest (such to the point that some fans groused she gave it more promotion than some of her own videos). You could easily argue that 19Addy9 was going to get released in some form or another, but let’s be real, it was Swift and Swift alone who got this thing finished in landspeed time and rubbing elbows with albums by The Weeknd and Lana Del Rey on iTunes as opposed to a quieter and later release ala Meow the Jewels.

But, hey, it’s here. Is it enjoyable? Absolutely! Adams dresses the album up in jangley, droning, roots rock melancholy without irreparably damaging the songs’ core structures. He makes some tweaks–reorients genders, drops the cringing rap-talk from “Blank Space” and “Shake It Off”–but these changes are Adams digging into a song’s pathos instead of doing some yahoo ironic cover. The changes are superficial; “Welcome to New York” is still an arms wide open, romantic greeting, but now it’s done as charging arena rock instead of blipping synth pop. “Out of the Woods” gets recut as a shuffling acoustic ballad with an extended coda, but the yearning in Swift’s original is still there. The most inventive recut, I’d say, is “Style”, which swaps out the exacting, hotblooded pulse of the original for a delightfully slurred and strutting rock tune that apes the original’s wide-eyed passion.

Only two songs strive for drastic reinvention. “Shake It Off”, which still feels like Taylor Swift’s first mean girl moment, is a quietly seething comeback that starts a little limp, but ends kind of awesome because of the Smiths-style guitar lead and Adams turns a repeated mantra of “I’m just gonna shake” into something kind of hopeful and kind of pissed. It’s cool, but I’m still partial to Screaming Females take. Much less successful–in fact, the only outright misfire here–is “Blank Space”. I’m not hot on the original, which we will get to in a bit, but recasting it as a lifeless Avett Brothers number is a downturn. These two songs highlight the key difference between Swift’s and Adams’ approach to the material: Adams plays up the vulnerability and introspection that’s always been (and ideally always will be) part of Swift’s songwriting, but in addition to those features, Swift on 1989 is very much someone performing in their moment, and Adams either can’t or won’t replicate that. You can feel that discrepancy most strongly on “Wildest Dreams”: I really like the Adams-ized shimmering, California pop rock version, but he doesn’t have the performance power Swift does. He blusters his way through the bridge, whereas she shines (“Wildest Dreams” is still one of Adam’s better compositions, though). Adams knows when to get out of the way, though, and “This Love” and “I Wish You Would” are the best songs on both versions.

While I like 198Ryn liking it feels complicated. A lot of that is because my opinion of 1989 is still complicated. Last year, I wrote that it was a smartly prepared, if undercooked, album that had a clear narrative, but felt cloying at the end of the day. Like, take “Blank Space” for example. I can sit here and praise it as an incredibly self-aware piece of songwriting that sets the stage for the album’s emotional and narrative punches while the video weaponizes and reclaims Swift’s status of “crazy ex-girlfriend” that the media (of which I am part) has perpetuated for years, all while looking poised as fuck, and mean every word of it. But, as a song, I would much rather talk about it than listen to it. That’s 1989 for me: the album is Swift at her most realized as a writer and especially as a performer, but she is so letdown by Max Martin, Shellback, and Ryan Tedder to the point that her success is in spite of the production, not because of it. 1989 wasn’t the best pop album of its year; it didn’t even have Swift’s best pop song. Even when the tempo throttles on “Shake It Off”, the end result is still too shellacked to be the pop gush it wants to be. Max Martin in 2014 ain’t Quincy Jones in 1982, you feel me?

All this is to say that I want to make sure I like the Ryan Adams version because I like vaguely alt. singer-songwriter schtick, not because Adams made something real or gifted her credibility. If anything, Adams has made these songs sound “deeper” while actually flattening them: the original “I Wish You Would” balanced its falling-in-slow-motion sadness with a bright edge to show the romantic conflict while Adams just has the sads. But, this is an awful lot to dump on a project that began life as a lark and ended as a well-sounding lark. I can’t imagine any of these becoming someone’s “definitive” version (at least I hope not), but anyone who found even a little to like in the original will like something here. I’m just waiting for Swift to announce her and Adams’ joint tour.

I enjoy music and music culture; I hope you do, too.
View all posts by bgibs122 →
This entry was posted in Album Reviews and tagged 1989, album, cover, music, pop, review, rock, Ryan Adams, Taylor Swift. Bookmark the permalink.