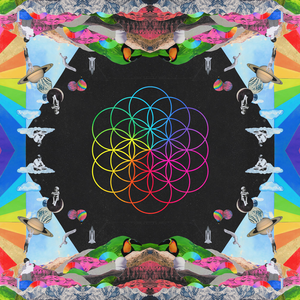 You can’t help but wonder if Coldplay are fucking with you.

To be fair, this is partially by design. Public opinion branded Coldplay irredeemably corny and lame circa 2006 or 2007 (yeah, yeah), so they got out in front of that reputation by leaning as hard into it as possible. If a band has the gall to name an album Viva La Vida Or Death and All His Friends and more or less deliver, there’s little ground to gain in calling them a bunch of windbags. Your burn on Chris Martin as a weepy tryhard isn’t going to top the fact that he named a lead single “Every Teardrop Is a Waterfall”, or has a hit called “A Sky Full of Stars”. Coldplay’s plan was to beat haters to the punch at making fun of them; when it comes to defense against being pretentious fops, those army jackets might as well have been body armor.

But A Head Full of Dreams is a step too far. The technicolor bombast missing from last year’s divorce album Ghost Stories is back, as is the relentless cheeriness, but neither serve a higher purpose. When you play into your type this hard, you almost need an objective, otherwise it registers as flat, grating noise. Without guiding principles like Viva La Vida‘s sonic nuance or Mylo Xyloto‘s wide screen zaniness, Dream‘s big, gauzy sound is all rising action; it’s like Martin and company forgot that uplift is as much about lows and restraint as it is highs and expanse.

For example, Mylo‘s “Paradise” is (to my ears) the band’s best pop single, and a major reason for that is because that gorgeous, arena filling chorus is the payoff from a relatively quiet piano ballad verse. By comparison, A Head Full of Dreams‘ disco-pop title track plods along without a sense of excitement or dynamics, and despite frequent attempts at big moments, only “Hymn for the Weekend” kind of works. It’s a matter of underwriting, and a common problem; whenever an artist plans a “fun” album or a “pop” one, it usually means they’re flattening the songwriting, and relying on lively performances of buoyant tunes to squeak by on weaker, less melodic or hooky material (ahem) because these songs are about fun!, and the artist thinks fun! should be easy (replace “buoyant” with “loud”, and you get the same pitfall with a band’s “rock” album).

And A Head Full of Dreams suffers because for all the day-glo set pieces and promo shots of paint-spattered, smiling members, they’ve never been a band that did shallow happiness well. While true, their best songs are full of yearning or seeking a better existence, something like “The Scientist” starts in a low place, and even “Viva La Vida” is built around a bunch of “I used to”s. “Fun” and “Everglow” fit the mold, and are easily two of the album’s best songs. Piano ballad “Everglow” is a piano-heavy ballad about Martin’s emotional state after his divorce from Gwyneth Paltrow that also features her on backing vocals, and is named after a made-up word he heard from “this surfer guy”. I should hate it, but it’s understated, and Martin’s over-earnest vocals are well-suited to regret. “Fun” is a more atmospheric, shimmering ballad, pleading with someone by saying “Didn’t we have fun?”, and works because its big chorus feels earned. Meanwhile, the inspiration-by-numbers “Amazing Day” and “Up&Up” are about, like, the magic of life or some shit.

One Tove Lo aside, A Head Full of Dreams‘ guest list is a bigger triumph of Coldplay’s professional network than musical chemistry. Did you know that’s Noel Gallagher of Oasis playing guitar solos over “Up&Up”, or famed “Gimme Shelter” wailer Merry Clayton on the same song? Does knowing either of these tidbits make “Up&Up” anything other than six and a half minutes of dystopic uplift? Sampling Barack Obama’s rendition of “Amazing Grace” at the end of an interlude is baffling, and the world’s preeminent whitebread British band sampling part of the memorial service for a victim of a U.S. racially motivated terrorist attack feels weirder the more I think about it (I get why Chris Martin wanted “I’m lost but now I’m found” for the context of the album, but it begs the question, “There are thousands of versions of this song available, why pick the loaded one, Chris?”). Beyonce turns in some extraneous vocals on “Hymn For the Weekend”, but really, the effort just makes me realize how long it’s been since I played “Lift Off”. Coldplay’s biggest strength has always been universality, so while Gwyneth Paltrow’s background singing on “Everglow” doesn’t hurt the song, it can take you out of the moment. The sensation rather sums up the album’s guest appearances as a whole.

Coldplay albums are normally good about missive statements, but this is a record that just screams why? Why follow up melancholy Ghost Stories with nothing but platitudes and inch-deep optimism? Why mismanage half a dozen high profile collaborators? Why does Chris Martin, a talented sad sack vocalist, try to wring emotion from lyrics like “So raaaaaage, raaaage with me” and “I’m feeling drunk and high” while sounding like someone who feels–ahem–“lit” after two glasses of white wine? Why insist on doing a “fun” album without writing fun, memorable songs? Coldplay’s made a habit of laughing at their own Coldplayisms, but A Head Full of Dreams is just a joke.

I enjoy music and music culture; I hope you do, too.
View all posts by bgibs122 →
This entry was posted in Album Reviews and tagged A Head Full of Dreams, Adventure of a Lifetime, album, Coldplay, Everglow, music, pop, review, rock. Bookmark the permalink.