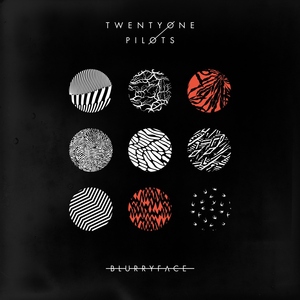 The start of the year’s always anticlimactic. The short, cold days no longer have that holiday glow, you have to take all the decorations down, and because I have an early January birthday, I always feel Old this time of year.

Similarly, Ohio’s very own Twenty One Pilots are a band that have always made me feel Old. I’ve known about them since a friend introduced me to “Holding Onto You” in 2011, and eventually I grouped them with other “big online presence” artists like Lorde, Halsey, and recently Alessia Cara in the category of artists whose music I like, but their aesthetic makes me painfully aware that I’m just far enough outside their target demo for them to look well-meaning but a bit silly (sidenote: Cara’s “Here” made it onto my ten top hit songs list of last year. I guarantee it would have been number one two years ago, and probably wouldn’t make the list going forward).

This goes double for Twenty One Pilots, who are quite well-meaning, but also quite silly. Almost everything you need to know about them is in “Holding Onto You”: here is a group who is entirely too much (Tyler Joseph has a rap voice that sounds like Billy Corgan doing “Love The Way You Lie”), maddeningly catchy, and a bigger messiah complex than Bono and Kendrick Lamar collaborating on a charity single. They are ardent in their belief that they make real music and emphatically not rap. They wore ski masks and knit hats in 90 degree heat and humidity when I saw them live last year. They lather themselves up in grease paint Imperator Furiosa style and encourage their fans to do the same because their record is about insecurity or some shit. They tour their number one album by bringing out people in hazmat suits labeled “Fame” and “Success”. They end their shows with “We are twenty one pilots, and so are you.” They’ll save your heavydirtysoul, man (okay, let me pull back a second: I like TOP’s music well enough, and as evident from my love of The Wonder Years, I’m not opposed to over-earnest bands, but guys, come on).

So when I saw “Stressed Out” nestled within the pop chart’s top twenty a notch below a Future/Drake banger, I was surprised. “Stressed Out” is one of the more straight ahead songs off last year’s blurryface; it mostly stays in that loose live-band hip-hop groove while occasionally throwing piano and some eerie synth in the background. The beat drops out a little at the chorus and hits a little harder on the bridge, but doesn’t do anything strange aside from me want to listen to the Pixies. I get why this is the song that caught on; it’s the one without nu-metal guitars or reggae overtones, but I kinda like those more grating parts of TOP’s personality.

I know I said vocalist Tyler Joseph reminds me of a Billy Corgan/Eminem hybrid, but there’s also a lot of Gerard Way in there, too. He has some of the brainy/bratty over-enunciation Way would use on clean vocals, and the strung out sneer on “My name is blurrrryyyyyface, and I care what you think” could come from an MCR single. Joseph’s vocal style–an up and down wordy cadence with nasally, occasionally needling delivery–fits well on “Stressed Out”, and I’ve always kind of theorized that if Twenty One Pilots had been founded in 2003 instead of 2009, they’d be an emo band.

The fact that they’re signed to pop-punk/emo-pop label Fueled By Ramen, the only label whose bands can still cross over, only strengthens that theory. Twenty One Pilots draw from the same themes of sadness and heartache that emo-pop bands have written about since 2003, complete with Pete Wentz-style “Tell me how clever I am” phrasing.

“I wish I found some better sounds no one’s ever heard/I wish I had a better voice that sang some better words” I mean, you guys seem to be doing pretty well for yourselves as is.

“I wish I found some chords in an order that is new/I wish I didn’t have to rhyme every time I sang” Get it? Because that line doesn’t rhyme? It’s so meta, so real.

“Wish we could turn back time to the good old days/When our mama sang us to sleep but now we’re stressed out” That chorus doesn’t rhyme either. I don’t know if this proves or disproves the song’s point. It’s also one of blurryface‘s weaker choruses?

“My name is blurryface and I care what you think” The character “blurryface” is supposed to be a representation of all of Joseph’s anxieties and insecurities. I think it barely registers on the album, and adds nothing of value. Then again, one of my favorite records last year was a double album that used dream sequences and doppelgangers as a metaphor for manic depression, so what do I know?

“Out of student loans and treehouse homes we’ll always take the ladder” Oh my God, this fucking band.

End of the day, I think it’s interesting to see Twenty One Pilots having an actual hit, but I kind of wish it was something louder, like “Tear In My Heart” that made it big. “Stressed Out” is okay, but when I listen to blurryface, it feels more like an extended interlude than a fully formed idea. That’s just my opinion, though, you don’t have to care what I think.

I enjoy music and music culture; I hope you do, too.
View all posts by bgibs122 →
This entry was posted in Radio Rants and tagged alternative pop, blurryface, hip-hop, pop, rap, review, song, Stressed out, Twenty One Pilots. Bookmark the permalink.