“I’m Not Like You Guys”: Ten Years of Angels and Airwaves 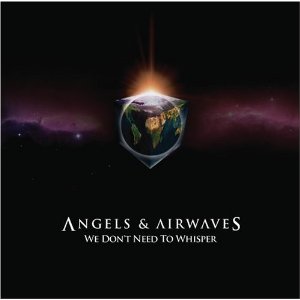 Ten years ago today, erstwhile blink-182 co-founder Tom DeLonge released the first album by his second band, We Don’t Need to Whisper by Angels & Airwaves. This was a baffling move in 2006, and has only gotten more confusing with time, because from the day they started, Angels & Airwaves (abbreviated as “AvA”) have always been a weird band. Not in the sense of making off-beat artistry or anything like that, but in the sense that DeLonge walked away from the commercial juggernaut that was blink-182 to hunker down and write about like, his mind’s eye or whatever for a fraction of the audience and influence. It’s been ten years dedicated to a flunky idea, a story made even more bizarre by the fact that AvA have yet to make a Great album. So little has been written about this band because only a sap would take this seriously a decade out.

Here’s the thing, though: I find Angels & Airwaves sort of fascinating. To clarify, it’s the same part of me that saw/followed the spectacle of last year’s Fantastic 4 reboot, and spent a week in December obsessed over Kid Cudi’s grunge-rock flop Speedin’ Bullet 2 Heaven; it’s a mix of genuine awe and appreciation with a healthy side of rubbernecking. It’s a sentiment born of asking “Why was this made?” If Angels & Airwaves was a brief vanity project, it’d be easy to say it exists to validate Tom DeLonge’s as an artist or something. But AvA is a band that has now survived a full ten years and different permutations. It clearly means a lot to DeLonge, so much so that he was willing to kill blink-182 (twice!) for it. There has to be something to this.

Astute readers will notice that the title quote isn’t from a We Don’t Need to Whisper song, or any Angels & Airwaves song for that matter, but from blink-182’s “Aliens Exist.” “Aliens Exist” isn’t a well-known blink song; it’s a deep cut from 1998’s Enema of the State that hasn’t been played live since 2002 (according to setlist.fm) whose biggest claim to fame is getting peppered with gay jokes on The Mark, Tom and Travis Show. But as a song about space, conspiracy theories, and Life Out There, it shot into relevance as space became a big part of AvA’s iconography at launch some 7 or 8 years later in the fallout of blink-182’s implosion.

I also lead with a blink quote because you can’t talk about Angels and Airwaves without touching on blink 182’s 2005 hiatus. In reality, blink’s hiatus was DeLonge quitting the band, something that all three members would dispute less as time went on. DeLonge has maintained that he quit the band because he wasn’t able to spend enough time with his family and had concerns about the band’s creative direction, and whereas bassist Mark Hoppus and drummer Travis Barker attribute the split to DeLonge trying to dictate the terms on which blink existed. Either way, the fact remains that blink-182’s break up was a widely-publicized dissolution of one of the world’s most popular rock bands when that distinction meant something. And, with all three members visible in the press, there was a public interest in next steps.

Reading post-2005 interviews with DeLonge, you get the feeling that he eventually saw blink-182 less as a ship to be steered, and more one to be abandoned. In a 2006 interview with Rolling Stone, he distances himself from the band, saying it was something he started when he was 16 that sort of kept going. Even when he came back to blink for an ill-fated reunion, he held the band’s jokester legacy at arm’s length, implying that blink-182 was who he was while Angels and Airwaves is who he is. 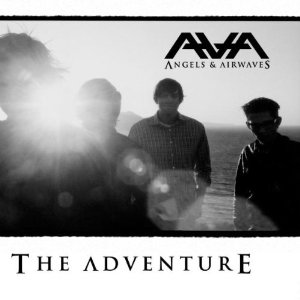 That DeLonge wants Angels and Airwaves to be his legacy is thunderingly obvious to anyone whose heard their debut single “The Adventure” and its “Hello, here I am/And here we go/Life’s waiting to begin” chorus. DeLonge had to make a good first impression with AvA’s first single/video, and on that front, “The Adventure” succeeds: you walk away from the song’s soaring, reverb-soaked, U2-biting guitar riff, that strident, stadium rock beat, and arms wide open chorus, and the video about the stars and planets and nature and life and shit, and you immediately get what Angels and Airwaves is about and are curious to hear/see more. This is gonna be a band that’s about positivity and light and healing and finding beauty and how we can save each other from ourselves and war (2006) and the human condition and everything bright and Important, and it’s going to be super Artistic and full of Statements. Suck it, Hoppus.

As you might have noticed, the fact that we aren’t living in naturalistic, spacefaring utopias communing with each other through our spiritual energies means that neither “The Adventure” nor the rest of We Don’t Need to Whisper set the world on fire. There are two reasons for this. First of all, DeLonge looks 546 times sillier as a Serious Artist waving his arms to illustrate the magic of the forest than he ever did running through a city naked or mocking Britney Spears. Secondly, for the considerable mileage AvA gets from their sci-fi rock band aesthetic, WDNTW is a decent if very limited album. Earlier I said “The Adventure” was a great first impression, and maybe it did its job a little too well: nothing on the record pushes outside that song’s sonic pallet, and those elements (“big” sound, reverbing guitars, soft synths, etc.) rarely coalesce as well elsewhere in the album. In fact, it would take until AvA’s fifth album The Dream Walker in 2014 for DeLonge to not use “The Adventure” as a template.

We Don’t Need To Whisper has plenty of cool moments–“Valkyrie Missile” is as cinematic an opener as you’ll ever find, “It Hurts” and “The War” are solid tunes, “Do It for Me Now” has a surprisingly effective beat, and at least it always sounds pretty–but it comes with a set of built-in weaknesses. DeLonge’s responsible for what works here, and in a very tangible way, he’s responsible for what doesn’t. Pulling off work this focused on uplift without sounding corny or contrite requires a deft touch he just doesn’t have, nor does he have a voice capable of supporting a melody when the tempos are as lumbering (side note because this will never be relevant again: “Distraction” always reminds me of Paul McCartney’s “Wonderful Christmas Time” for reasons I can’t explain and piss me off). He also falls for the common (and incorrect) presumption that Serious Artistry Means Long Songs, stretching everything here north of 4 minutes long, resulting in a 49 minute album that feels at least 10 minutes longer than that.

All of these factors contributed to a decidedly mixed reaction. The album sold well enough thanks to legions of inherited blink-182 fans, but didn’t generate any hit singles of its own, and critical reception peaked at “well-intentioned but misguided.” Audiences were likely put off by DeLonge’s proclamations that Angels and Airwaves first album was going to be “The best music made in decades” and that he was “preparing the greatest rock and roll revolution for this generation”, claims that don’t exactly pass muster for a mild-mannered 80’s-era U2 record. DeLonge would later circle back on these comments, disclosing that they were the result of then painkiller addiction, but it would seem sobriety hasn’t changed the modus operandi for AvA, who released records to a lesser–but still sizeable–fanbase in 2007, 2010 (one of RAM’s earliest reviews, in fact), 2011, and 2014.

In recent years, DeLonge’s gone multi-media with AvA, too. Around the release of their second album in 2007, he founded Modlife, a sort of pro-Bandcamp/social media hybrid for bands to connect with audiences, and started prepping for an AvA full length movie. The movie LOVE eventually came out in 2011 (I watched it back when it was on Netflix–it’s a fine “it’s late and my brain is slightly melted” sci-fi drama), and in 2014, Modlife transitioned into To The Stars to focus more on AvA related ventures. With this shift, the band’s become more of a studio project; longtime guitarist David Kennedy and bassist Matt Wachter scaled back their involvement somehow, leaving just DeLonge and drummer/instrumentalist Ilan Rubin. Through TTS, DeLonge’s produced books, animated movies, and graphic novels based on AvA’s output and alien conspiracies, as well as EPs and demo comps at a decent clip. Presumably there’s an audience out there for t-shirt and graphic novel bundles and AvA instrumental downloads, but I also wonder if any of these book deals are subsidized by like, “First Date” royalties.

Ten years in, Angels & Airwaves aren’t in the upper echelon of rock bands, but I think DeLonge’s fine with this. He’s finally somewhere where, even if his vision gets laughed at by outsiders, it’s his. No one can take that from him. This dedication was reaffirmed last year when he was fired or quit again (depending on whose story you believe) from blink-182 after refusing to put in time for a new blink record. Honestly, AvA’s lasting legacy might just be how much they’ve meddled with blink’s: the ’05 hiatus sidelined blink just as a newer generation of pop-punk acts came up, you can hear AvA all over their not very good post-reunion album, and they’re why the newest version of blink features Matt Skiba. More than that, without that first hiatus, blink-182 stays contemporary for a longer time; now as a reunion/legacy act, anything Skiba, Hoppus, and Barker come up with will forever be written off for the Mark, Tom, and Travis show. The ten years after We Don’t Need to Whisper haven’t always been predictable, but for better or worse, DeLonge didn’t plan on being quiet. You can hear it as “Valkyrie Missile” ends: “Who do we think we are? We are Angels & Airwaves.”

I enjoy music and music culture; I hope you do, too.
View all posts by bgibs122 →
This entry was posted in "Thoughts" and tagged album, alternative rock, angels and airwaves, anniversary, blink-182, music, retrospective, rock, the adventure, Tom Delonge, we don't need to whisper. Bookmark the permalink.