You Should See Them Live: blink-182 at Riverbend in Cincinnati

A rock show on a late night in the summer singing along to the songs you love with a beer and your friends. There’s no getting more pop-punk than that.

But that makes sense, right? If you’re about to see one of the biggest pop-punk groups, why half-ass that shit? You and everyone else in the cheap seats are going to end up shouting “LATE NIGHT. COME HOME. WORK SUCKS, I KNOW” by the night’s end, so you might as well lean all the way into that with something sleeveless, swoop bangs, and Chucks (dear God, so many Chucks). You know that the slightly retooled blink-182 aren’t going to hold back, and at Riverbend, neither did thousands of their fans.

Really, the slightly retooled blink aren’t just doing well for themselves, they’re flat-out doing well. This is a pretty serious reversal from the last 7 years of rough going for the Mark, Tom, and Travis show; despite a bright reunion in 2009, sessions on an album stalled, and 2011’s Neighborhoods proved to be both a lousy blink album and a middling Angels & Airwaves one. A few years of tours and false starts later, guitarist and co-founder/singer/writer Tom DeLonge left the band (again!), leaving drummer Travis Barker and bassist co-everything Mark Hoppus to manage the band, the hits, and the dick jokes. They recruited Alkaline Trio singer/guitarist Matt Skiba to pinch hit for some 2015 tour dates, after which Skiba formally joined the band, and about a year later, here we are with California and a substantial tour. And already, California has outsold Neighborhoods‘ opening and generated its own hit; blink is friggin’ back.

So why’s blink-182, a band that was written off as lightweights in its day and even now gets the backhanded “great singles band” compliment, having a moment? It could be that us filthy, nostalgia loving millennials finally have enough disposable income to buy lawn seats by the score, but this doesn’t account for just how packed Cincinnati’s Riverbend amphitheater got, or why me and my gaggle of mid-20’s friends felt dangerously close to “old” for the crowd. Is California just so great that it captured the zeitgeist and brought in new fans? Wishful, but no; it’s handily better than Neighborhoods, and I’d even rank it above the more-filler-than-you’re-remembering Take Off Your Pants and Jacket, but ultimately it feels more like a good transition record than an outright good one.

No, I think the answer is so simple, it might as well be a blink single: this is a great band with a lot of killer songs. One of my friends said afterward that she’d been nervous about not knowing what all was played, but she was thrilled because she ended up recognizing just about everything. Blink just has that kind of depth. It actually borders on overwhelming to hear them all chained together, but look at how many hits this one band has: “I Miss You,” “All the Small Things,” “What’s My Age Again?” “Bored to Death,” “The Rock Show,” “Feelin’ This,” “First Date,” “Adam’s Song,” “Dammit,”–oh man, it’s still going–“Down,” and “Stay Together For the Kids.” You’re not gonna see Sum 41 get people fired up once “Fat Lip,” “In Too Deep,” and maybe like, “The Hell Song” come through, but blink were able to blow through half a dozen hits early on, lean into deep cuts and fan favorites for the middle, and rally again with more hits for a surprisingly fun and robust set.

And what a set it was. The songs were almost entirely played as they were written–I think the only difference was “I Miss You” used phasered clean guitar instead an acoustic–but shit, “Feelin’ This” and “Dysentery Gary” are weapons-grade catchy out of the box. Curiously, just about all of the band’s “ha ha, penis” throwaways appeared, but 1. hearing “Built This Pool” within shouting distance of the world’s biggest flat-surface swimming pool was pretty funny, and 2. they’re actually kinda entertaining as set-breathers. The rest–new songs like “Cynical” and “The Only Thing That Matters,” the classic “Carousel,” and deep cuts “Violence” and “Reckless Abandon”–held up against the more famous stuff, mostly based on setlist placement and performance (an aside: I more or less memorized Enema of the State as a mopey, broken up with 16 year old, so even though I know “Dysentery Gary” and “Dumpweed” shouldn’t fly today, ain’t shit stopping me from screaming along with “Fuck this place, I lost the one/I hate you all/your mom’s a whore!”). 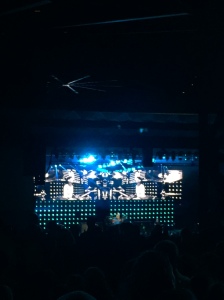 Each member brought it for that setlist, too. Travis Barker is every bit as manic a drummer live as you’d expect (And he, the notoriously quiet member of the band, spoke! He said “Hey, Cincinnati!“ at one point! Hoppus even quipped “Yeah, Cleveland didn’t get that shit”), and he kept the solos to a tasteful minimum. Skiba’s a full-time member now, but still somewhat in gracious guest-star mode: he deferred to and assisted Hoppus on banter, but any apparent oddness about him playing DeLonge’s parts dissipated halfway through “First Date.” Because let’s be honest: you don’t replace the dude who wrote half of your songs without people noticing. It’s like trying to hang out with your friends knowing there’s been a rift between some folks; you’re all going to know. So instead of talking about the man directly, we were treated to a little something I’m calling…

The Top 4 Times blink-182 Subtweeted Tom DeLonge
4. Replacing him with a competent singer: Skiba seems to get on well with everyone in the blink operation, and his parts on California are enjoyable enough, but the fact that he won’t sing like someone’s constantly spraying his throat with a Super Soaker’s gotta count as a mild Tom burn.
3. “Not Now:” I’ve always gotten the feeling Hoppus, like all of us, thinks AvA is kind of silly. Introing the last pre-hiatus single DeLonge wrote with a jokey robot voice announcing “Commence. Space. Noises.” helps that theory.
2. No Neighborhoods: There are legitimate reasons for blink to let this LP fall away (it’s underwhelming, and Travis Barker’s been surprisingly candid about how not-fun it was to make), but stiff-arming “Heart’s All Gone” because it was on the band’s most DeLonge-centric record feels deliberate.
1. ”Man Overboard:” “Man Overboard” is straight-up about that time Mark and Tom fired a dude from blink-182, and if you think DeLonge wasn’t on Hoppus and Skiba’s minds as they sang tut-tutting lines like “We can’t depend on your excuses/Cuz in the end, they’re fucking useless” and “You can only lean on me for so long” then, I don’t know, I’ve got a book of alien conspiracies to sell you. This was definitely a subtweet.

Whenever I heard any news about blink in the fallout of their most recent band shake-up, I subconsciously thought “Why is this band still going?” And I didn’t think it out of malice! If anything, I was wondering why Hoppus and Barker couldn’t just dose up on post-punk records and churn out another +44 album, but I get it now. blink-182 is going to continue so long as Mark Hoppus can brandish a low-strung P-bass and chirp his way through “Dammit” because Mark Hoppus lives for being in this band. He led the charge the whole night through, whether that meant blasting through 16-year-old songs, bantering with the crowd to break out their emo swoops “Because it’s 2002 and your parents don’t ~understand~ you and Taking Back Sunday”, or telling jokes about the humidity as his gelled up mohawk lost the fight with Cincinnati’s abhorrent mid-August weather. blink-182 is what he’s done with his life, and instead of finding that limiting, Hoppus honestly seems to relish it. There was this disarming moment when, at the end of the night, he put down his bass and, as everyone shuffled out, flopped into a pile of confetti at the front of the stage with joyful abandon and just lied there for a second before leaving the stage, sweaty arms now plastered in confetti. It just seemed like a dorky, fun little moment for himself. Endearingly goofy, sweaty summer fun; that’s blink-182 in a nutshell.