Feedback is a Ranting About Music feature that dives into a famous artist’s least-famous album. Today felt like as good a time as any to take it off the ice for indie rock band Arcade Fire’s 2007 album Neon Bible. 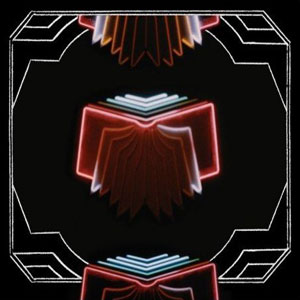 Within Arcade Fire’s discography, Neon Bible is the ugly duckling: it doesn’t have the classic status of its predecessor Funeral, the mainstream success of Grammy Album of the Year winner The Suburbs, nor the Festival Rock cool of Reflektor. Instead, this is Arcade Fire at their most buttoned-up, furrowed-browed, and Bible-and-journal-clenching serious as they lash out against the loudness and aggression present in Western material culture; it’s a stern affair even for a genre as hilariously joke-averse as indie rock. Neon Bible is a musically insular album, too, featuring a less catchy and more rustic version of the ramshackle indie rock the band perfected on Funeral, and frequently relies on unfashionable choices like prominent church organ, orchestral arrangements, and early rock and roll influence to convey its grandiose angst. This is the sort of album whose centerpiece is a dirge-y marriage of surf rock and symphony adrift in reverb about being adrift in the noise of modernity.

Here’s the thing, though: I kinda love Neon Bible, particularly for its prickliness. It’s huffy and overwrought and probably not as smart or deep as it wants to be, but the songs are there for the most part, and underneath the album’s dour attitude is an earnestness that I find oddly endearing. It’s fully committed to what it’s saying and how it sounds, and I appreciate the band’s willingness to write a singer-songwriter-y record with unfashionable musical accents instead of churning out another Funeral. It’s an album I habitually come back to.

To be fair, though, I brought it back in rotation even before the election because Neon Bible is also an excellent fall album. The conversation around certain types of music fitting certain seasons best begins and pretty much ends with “Songs of the Summer” fare, but I’d argue each season has music that fits it best. Dark, atmospheric records with expansive sounds best fit the winter (Beach House’s Depression Cherry, Placeo’s Meds, and most Drake), while spring is best suited for music that’s bright but still textured like the first sunny parts of the year (soul writ large, Modest Mouse’s Good News For People Who Love Bad News, and Oasis’ What’s the Story Morning Glory?). A good fall album captures the season’s balance: it’s warm with shade filtering in at the edges to give it a slight sense of isolation, and it moves faster than winter’s glacial crawl, but lacks summer music’s hectoring pace. It’s cozy, but discomfort isn’t completely out of the question, yet it has a distinct sound. A few great fall album examples include Lorde’s Pure Heroine, Transatlanticism or Plans by Death Cab for Cutie (any of Death Cab’s non-Narrow Stairs albums, really), and Demon Days by Gorillaz.

Neon Bible’s rustic instrumentation and solitary nature fit the fall criteria, too. The mix favors crisp acoustics over the indie rock jangle of Funeral–second single “Keep the Car Running” gathers more momentum from its strings and mandolin than electric guitar, and the title track is so unplugged that it can be played in an elevator, provided you can find one big enough to fit the band. The record’s idiosyncratic organ and orchestral flourishes are as vibrant as turning trees. But more than musical details, Neon Bible matches fall in mood and tone. The reflective nature of its lyrics matches that of a fall walk, and while the album is very worldly in how it engages with culture and religion, it has a sense of remove, too. And much of the album carries that same “stranger in a strange land” dissociation that comes with fall: the shifting tempos of “The Well and the Lighthouse” match those days where you experience 3 different weather patterns in 12 hours, “Ocean of Noise” is for the overcast days that refuse to change, and “Black Wave/Bad Vibrations” captures the first-week-after-time-change jitters that come with plunging into total darkness by 6 PM. Autumn is pensive if a little irritable, as is Neon Bible (Arcade Fire’s other albums by season, for the record: Spring–>Reflektor, Summer–>The Suburbs, Winter–>Funeral).

And right now, “pensive, if a little irritable” works for a lot of people, just as it did in 2007. Neon Bible came out that March, and was written and recorded in the previous year after constant touring behind Funeral. Its world-weariness comes from touring, sure, but 2006 also has a lot of Western malaise to it: the roiling anger against Bush had burnt itself out, but so had enthusiasm for the increasingly complicated War on Terror, and it’s still pretty far from 2008 and, y’know. Some parts of Neon Bible are tied to its time, like the soldier mentioned on “Intervention,” the cringeworthy “Mirror, mirror on the wall/Show me where them bombs will fall” on “Black Mirror,” and its television-centric/pre-smartphone take on consumerism. But Neon Bible’s themes are still largely relevant; it’s not like the world has gotten any quieter in the last 9 years. Call it MTV, call it YouTube, the “stop selling me shit” meaning behind “Windowsill” still resonates.

On religion, Neon Bible still resonates, too. For a long time, one of the top comments on that elevator video further up suggested that the band should have been ripping a Bible instead of a magazine for percussion, but I feel like this completely misses what the album’s trying to say about faith and religion. Neon Bible’s views on religion have always struck me as coming from a person of faith, not against it, and frontman Win Butler confirmed this in an interview with Paste where he describes the album as “addressing religion in a way that only someone who actually cares about it can.” And maybe it was just clear to me because of my Catholic background, but critiques like those in “Neon Bible” and “Intervention” (which flatout sounds like a church hymn itself) are written in a way that would only come from someone familiar with religion. Taken together, the album’s criticisms take issue with how religion can be co-opted by the insincere, who will use the meaningful role it has in people’s lives to advance their own agenda of either power or wealth. The issue is less religion itself as an institution and more the televangelists who preach prosperity theology to line their own pockets (“Neon Bible,” “Antichrist Television Blues”), or figures who prey on people’s fear and use organized faith to manipulate them (“Intervention”). These people are effectively false prophets, treating something sacred like it’s part of the same shiny, buy/sell bullshit that corrodes the soul with scripture in neon and oceans of noise that keep people from what’s real and truthful.

But despite its reputation as a bummer, Neon Bible’s finishes by running toward the light. Things pick up with the stirring “Windowsill” where, after an album-long list of society’s ailes and personal woes, the song’s narrator decides they want to be above all the negativity and noise. Then comes “No Cars Go.” “No Cars Go” originally appeared on the band’s first EP as a rumbling, midtempo plea for escapism; on Neon Bible, it’s a relentless epic that feels like it can actually hit the highs it believes in. That it does this with a fucking beautiful string arrangement that sounds like flying only adds to the light.

Closer “My Body Is a Cage” brings things back to Earth, but encapsulates the temperament of the full album: it starts dour and alone while gradually slipping into despair before almost giving in entirely as martial drums, organ, and a choir wail with Butler at full blast. But then, just as things sound darkest, the song centers on a refrain of “Set my spirit free/Set my body free.” as the choir and organ continues to swell like a closing hymn at Mass before ending without resolution. It’s not the same as ending with the out-and-out soaring magnificence of “No Cars Go,” but feels truer to the album: that even almost defeated, Neon Bible can still aspire to goodness.

That Neon Bible secretly has some of Arcade Fire’s strongest material is almost an added bonus: “Keep the Car Running” and “Intervention” are still rightly remembered, “Ocean of Noise” is one of the band’s go-to deep cuts, and from “Antichrist Television Blues” to the end is up there with Funeral’s final stretch and the opening charge of The Suburbs for Arcade Fire’s best sequencing. But it’s not just the quality of the material, it’s what it’s saying and how it says it that keeps me coming back. Neon Bible, for all of its crankiness and coarseness believes that what it’s saying has value, even if it looks uncool. It wallows and it’s overly serious, but also rejects what’s predatory, and wants to champion what’s real; it wants to be free. It believes it’s time to wake up.

I enjoy music and music culture; I hope you do, too.
View all posts by bgibs122 →
This entry was posted in "Thoughts" and tagged album, arcade fire, autumn, feedback, folk, indie rock, music, neon bible, win butler. Bookmark the permalink.