Bunbury’s back in Cincinnati for it’s 5th year, and as always, I’m down to see a bunch of people play in my very own city. This year will be especially nice since I’m not doing this while moving. Anyway, let’s begin.

The Upset Victory
Due to some recent problems with the, well, Ohio River’s stage, the River Stage was moved yesterday from it’s usual place here to far opposite the main Yeatman’s stage. It seems like a move that isn’t super going to work since it bottlenecks traffic between two stages in a pretty big way, especially once either one builds up a significant crowd. And also, did you ever play that old computer game Rollercoaster Tycoon? The gist of it was that you had to build an amusement park with rides and food and janitors and stuff, and it always seemed like as your park got off the ground, you realized you didn’t build the log flume or something, and so you just chucked it in the first open area and retroactively tried to make it make sense there. That’s what being at the River Stage felt like yesterday.

The upswing to this is that you can essentially stand behind the stage and still hear everything fine, which is how I heard Cincinnati group The Upset Victory. I always like hearing local rock bands at Bunbury because they tend to play the shit out of their material, and usually on a bigger stage than they’re used to. That’s pretty much what happened with TUV, who just sounded thrilled to be there, and played their hearts out on an early Friday set.

FLOR
The first of Bunbury’s SEO-friendly acts for the weekend (a list including names like FRENSHIP, CAAMP, and probably whatever the hell CVBZ is), FLOR opened the main stage with an especially drum-y spin on radio-friendly alternative rock. They had pep, and stood out a bit based on the singer’s androgynous vocals, but otherwise they reminded me of the sort of genial, down the middle indie acts that Bunbury’s filled the lower poster ranks with for the last few years. Generally A-OK.

July Talk
Yesterday, July Talk had in their possession: a too-short timeslot, tons of bluesy riffs, two charismatic singers, and (as a friend of mine pointed out) one of the biggest voice-appearance discrepancies you’ll ever see. Singer Peter Dreimanis looks like any number of young, skinny white guys, but he has this great snarl of a voice that sounds like whiskey-soaked broken glass in the best way possible; you just look at him and try to calculate how that voice comes out of that body. The chemistry between Dreimanis and singer Leah Fay was off the charts too, and only made the band’s slash and burn rock sound better. All of their stuff is streamable, so I highly recommend checking them out, and trying to see them when they’re in your town.

NF
NF is a rapper. His website is http://www.nfrealmusic.com. His newest album is called Therapy Session. Yes, he is that serious. His style has been compared to Eminem’s, partly because Eminem is still where most people’s minds go when they see a white rapper, but also because it’s entirely possible neither of them has smiled since 2009. From the songs we saw, he also seems like a distillation of early Linkin Park’s jittery angst, but without Mike Shinoda’s stability. NF confirms last year’s All-Black Theory: that an artist wearing all black, undesigned clothing will not do anything to surprise you, so we checked out early to grab drinks out of our car instead of hearing more, which felt like its own form of therapy.

Civil Twilight
We made our way back to the River Stage for the better part of Civil Twilight’s set. CT exist in that “alternative rock/indie rock” zone, but come down firmly on the alternative rock side to me because their songs have that forward momentum and sense of drama that comes from alt. instead of indie’s bounce. The band’s been around for more than a decade, and toured pretty regularly for the last few years, which meant they had a polish that so far no one else in the day really had. You could pick out the nuances in their songs, and “Letters From the Sky” live wouldn’t have sounded out of place on In Rainbows because of it. They closed with a rollicking cover of “Immigrant Song” (that riff is somehow still underrated), probably because their most recent album is Story of an Immigrant, but also because why the fuck wouldn’t you swing the hammer of the gods?

Jared Mahone
I’ll be honest, I kind of zoned out for a bit as Civil Twilight’s set carried on. A thing to know about festivals is that if you do a full day, you’ll end up hitting kind of a lull sometime between 5:30 and 7:00 because at that point, you’ve had a bit of a day already, and the biggest acts are still a ways off. So a friend of mine and I ended up checking out the acoustic stage and the accompanying chill area. They had some kind of air/beanbag type chairs scattered about the grass (picture tomorrow? Picture tomorrow), and a raised stage for solo/small local acts. I didn’t get a beanbag chair because they were all taken, but sitting in the grass and listening to an unplugged performance made for a nice recharge.

The Shins
The Shins are a band I’ve always kind of known more about than known outright, but they ended up being a great late-day set. With a setlist that a friend relayed to me was mostly from their mid ’00s heyday, the band cranked out an enjoyable hour of music that wasn’t too intense, but was end-to-end one of the more satisfying and fun acts of the day. They were good counterprogramming to a day that had ended up kind of zigzagging on what you were hearing, and after a fairly tumultuous decade, Mercer just seems happy to have a band ready to play and an audience ready to hear him. And yes, they played “New Slang.”

Death Cab For Cutie
One of the guys I go to Bunbury with has Death Cab For Cutie as one of, if not his flatout, favorite bands, so of course we were going to get a primo spot for their set. Death Cab and I are interesting in that I know and really like a lot of their songs, but I always feel like I got to them just too late in life to be a diehard fan. Like, if I had gotten to Transatlanticism a few years earlier, that would have been it. But, as it turns out, Death Cab and I (really, my entire group for the day) are a perfect match: the band is at veteran status at this point, and brought out “I Will Possess Your Heart” (the good, extended version), “Crooked Teeth,” “You Are a Tourist,” “Cath…,” “The Ghost of Beverly Drive,” “I Will Follow You Into the Dark,” “The New Year,” “Title & Registration,” and closed on a beautiful version of “Transatlanticism.” 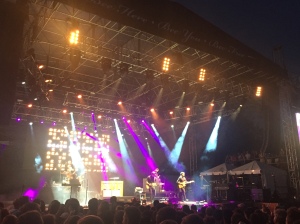 The remarkable thing about Death Cab–really with Ben Gibbard as a writer overall–is that their songs are unabashedly verbose, but they’re also easy to sing with, as evidenced by the crowd singing along with every word of like, “Title & Registration.” They also got the coveted “sunset into night” slot, so you still had that summer sun for “Crooked Teeth,” and then you get the dark for “I Will Follow You Into the Dark.” It was easily the best set of the day.

Wiz Khalifa
After Death Cab’s set, I joked that going from them to Wiz Khalifa was like going from Arrival to Transformers. I didn’t mean it as a slam on Wiz (well, not entirely), but that going from one to the other demands reorienting your expectations as an audience member. One side is a fairly intricate, cerebral experience with no small measure of emotional investment, and the other side is wide-screen, high-saturation, one-size-fits-all maximalism; you’d get the same whiplash going from Noname to Kings of Leon.

And like, Wiz Khalifa just doesn’t scream “headliner material.” Snoop Dogg killed it a few years ago based on charisma and back catalog, Ice Cube excelled last year on sheer enjoyment, and Wiz really doesn’t have enough of any of those to fill 75 minutes. He could probably do a good 45 minute set, or pull from his features to work his way up to an even hour, but at 75 minutes, he’s playing snippets of “Smells Like Teen Spirit” just kind of because, and from my spot near the back of the crowd, I’m able to see a steady retreat of people who decided “Black and Yellow” isn’t worth the wait. Everything kinda bled together after a while, and eventually, I found myself sticking it out on the fascination of wanting to see what a 75 minute Wiz Khalifa setlist looked like more than just experiencing it.

I enjoy music and music culture; I hope you do, too.
View all posts by bgibs122 →
This entry was posted in "Thoughts" and tagged Bunbury, Bunbury Festival, Cincinnati, Death Cab For Cutie, G-Eazy, July Talk, music festival, the shins, Wiz Khalifa. Bookmark the permalink.