Hello, and welcome to Radio Rants. Who do we have this week? Someone new?

Huh. Well, Rihanna’s back with the lead single from her new album Talk That Talk, due out in Nov–hey, wait a damn minute. Didn’t I just spend last November sidestepping a new Rihanna album?

…so yes. It’s not that I have any against Rihanna personally, it’s just that she’s always seemed so inconsequential. She has hits, but she also strikes out more than other pop stars of her caliber, and even her hits aren’t compelling once they’re off the radio. Do you really want to hear “S.O.S.”, “Umbrella”, or “What’s My Name” when you don’t have to? When you listen to a Rihanna song, you know what you’re getting into: [current trendy sound]+[Love/Intercourse with you lyrics]+[steamy video]=Hit (maybe).

So, “We Found Love”, featuring Calvin Harris. Oh, so this is like a duet? Maybe Harris does backing vocals or something? Hang on, who is this guy, anyway? According to allmusic, he’s a Scottish singer/songwriter/DJ who does some production as well.

Wait, this isn’t going to be one of those bullshit “features” where the artist features their producer for no other reason than to attract credibility for the name, is it? I don’t get this; when did producers start getting named billing? I can understand why David Guetta puts his name up top when it’s his project, but when did little people like Afrojack and Calvin Harris get to do this?

To his credit, Harris did a good job producing “We Found Love”. The opening production manages to be electronic without especially club driven, and is even kind of soothing and peaceful. Unfortunately, this pleasantness gets interrupted by a fire alarm synth and building drum beat that guts any atmosphere the first fifty seconds, and drags us back to the dance floor. Harris keeps the basic elements from earlier in the song, but amps them up to club status.

So yeah, aside from the graceless transitions, the production is solid. The hook is strong, and the chorus is super danceable. It’s pretty, but not entirely happy or sad, which keeps with the song’s general tone.

Speaking of which, “We Found Love” is sort of an interesting song lyrically. As a whole, it’s ridiculously strong; the narrative of finding a loved one, but knowing that you have to let them go is present in a surprisingly subtle way. The chorus lyric of “We found love in a hopeless place”  is, I think, one of the better pop lyrics we’ve heard this year, and yes, I know this blog opened with me riffing on Rihanna for poor lyrics. Unfortunately, the song seems to be very aware of that, and repeats it ad nauseam. After awhile, it feels more like a space filler than anything else.

Part of me thinks that this song barely counts as more than an instrumental. While Rihanna does sound good here, and has good lyrics to work with, her performance isn’t really the main focus. It feels like Calvin Harris had this song lying around, and gave it to Rihanna so that Americans would actually listen to it. And the end result feels like most of her hits: it’s not bad, but it doesn’t really have a lot of punch to it either.

Although I have to say that the video certainly looks nice. It matches some darker imagery to a fairly poppy song sort of like a “Try, Try, Try” with fewer clothes and more writhing. It’s put together almost like a small film. A small film in which Rihanna does drugs, plays around, and ultimately leaves her douchey boyfriend. Her douchey boyfriend who seems aggressive…and violent…with lots of muscles…and black…with blonde hair… 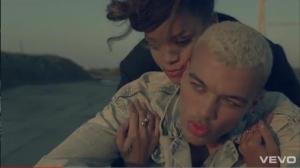 I enjoy music and music culture; I hope you do, too.
View all posts by bgibs122 →
This entry was posted in Radio Rants and tagged Calvin Harris, music, pop music, radio, review, Rihanna, We Found Love. Bookmark the permalink.