Hello, and welcome to Radio Rants. This is gonna hurt. 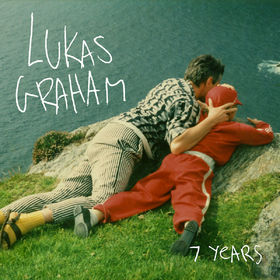 I’ll just be straight with y’all: there was a long stretch where Radio Rants were fueled almost entirely be me being a hater. It probably wasn’t fair to like, C-grade Katy Perry singles, but it’s how life was. As I’ve done this longer and gained some perspective, I’d like to think I’ve gotten more even-handed; something like “Same Old Love” might not move me, but it doesn’t bring the knives out, either. Everything deserves a chance, you know?

Then you get “7 Years,” and you just have to escalate the hate.

“7 Years” is by Danish band Lukas Graham, which is not where I expected that sentence to end before I researched it. The “Danish” part sounds about right since Scandinavians own 20% of the Top Ten at all times, but “band”? Turns out, Lukas Graham is a band consisting of  Lukas Graham Forchammer and some other dudes, so it’s like if Joseph Gordon-Levitt started a band name Joseph Gordon, only not at all, because JGL would probably debut them on Jimmy Fallon and it would be charming instead of insipid. But the buried lede here is that this man’s last name is Forchammer, and why is that not your band name? “Forchammer” is a killer band name. With a name like that, you could release a song as terrible as “7 Years,” and still be cool.

Okay, let me attempt some measure of fairness here. As a composition, “7 Years” is…acceptable. It’s anchored in that lightly soulful piano-pop sound that OneRepublic made big, and even has some Ryan Tedder-y sing-song melodicism that I guess isn’t entirely awful during the verses. It will probably be slow danced to during prom season, and might mean something to someone because of that, which is something any songwriter should be proud of. It won’t cause your headphones to catch on fire, always a plus.

It’s really hard for me to say nice things about “7 Years,” for reasons that aren’t entirely its fault. Don’t get me wrong: the song is cloying, oversung, and limply produced; by most objective measures it is not a good thing. Neither is Meghan Trainor’s “No,” but “No” doesn’t piss me off the same way. When I first heard “7 Years,” I said I was allergic to it, and I mean that almost literally; this is a song made up of the tropes I hate in pop music. It has that same crushing self-seriousness behind dopey twee that A Great Big World and Passenger had. Forchammer’s voice is an unholy combination of Nate Ruess’ pompous yelp and Tyler Joseph’s whiny, wild emoting, and lyrically, he lacks fun./Twenty One Pilots’ ability to turn a phrase while doubling down on their overwrought songwriting; he’s at Macklemore levels of earnest but without his necessary humility. “7 Years” fails just as a listen because it seems to be made by people who wanted a song by OneRepublic or The Fray, but without all that rambunctiousness. Put all this together, and it’s enough to make me break out in hives.

I didn’t think “7 Years” was by a Danish band whose leader is older than I am, I thought Lukas Graham was one of those YouTube youngins that fluked into a hit. The song has that sterile production you hear in YouTube artist’s work (that these guys don’t run in the same circles as Shawn Mendes astounds me), complete with pushing the vocals all the way to the front. More than that, “7 Years” reeks of the performative sincerity you find on YouTube. Put it this way: you know those comments you see on almost every hit song’s video that are like “This song is so REAL, and [artist] is so honest. Music is my life and my passion and I’d love it if you could check out my cover of this song or any of my originals on my channel because I’m just trying to make it. Peace and love”? “7 Years” feels like the original song you click over on, listen to for a minute, and put entirely out of mind.

“Once I was 7 years old, my mama told me/Go make yourself some friends or you’ll be lonely” Dude, your mom probably wanted you to go play with someone so she could have a minute to herself after the last 7 years, not because she wanted you to have peer attachment issues. I hope.

“By eleven smoking herb and drinking burning liquor” This seems like the kind of thing you could base a whole song around and not just a throwaway line in the first verse. Also, Forchammer has this super adolescent voice, so I thought being eleven for him might have been like five years ago.

“Something about that glory just always seemed to bore me.” Liar.

“I only see my goals, I don’t believe in failure.” I promise you, someone you know has or will post this exact lyric as a meme on Facebook.

“Soon, we’ll be 30 years old, our songs have been sold/We’ve traveled around the world and we’re still roaming” Okay, so I know there’s a real chance that English isn’t Forchammer or whichever member’s first language, but you’ve gotta see this song’s Genius annotations. The one for this line is about how some people’s fire enables them to escape the solar system, and I can only wager this means Lukas Graham are working on a higher level than the rest of us.

I could keep bagging on the lyrics here, but I feel my throat closing up. “7 Years” is about growing up and wanting to do something with your life (#MillennialAngst, we meet again), but it’s such a hollow, chintzy sounding song that I can’t take it seriously, especially when the strings start working overtime at the bridge like it wants to be dramatic and shit. In terms of “pop soul,” Lukas Graham make Maroon 5 look like James Brown. Forchammer is an unimaginative writer and an overly chirpy vocalist; I feel kinda bad for hating on a dude who’s just trying to live his nearly 30-year-old life, but then I remember that “7 Years” starts and ends with the sound of a fucking movie projector and nope, it’s the worst again. I don’t want to remember “7 Years” in 7 years. I barely want to remember it in 7 days. Thankfully, it’s dull enough that I might get my wish.

I enjoy music and music culture; I hope you do, too.
View all posts by bgibs122 →
This entry was posted in Radio Rants and tagged 7 years, Lukas Graham, music, pop, rant, review, song, this song kills my soul. Bookmark the permalink.