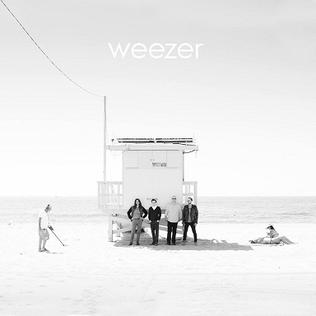 In fact, while Weezer’s tenth album overall and fourth self-titled one–aka “the White Album“–is their third quality album in a row after Hurley in 2010 and 2014’s Everything Will Be Alright In the End, not only is it good, it’s good in a way that’s free of qualifiers and hedged expectations. The White Album is simply a half-hour plus of largely enjoyable power-pop with big guitars, quirky/”quirky” song-writing choices, and just enough heart to keep a listener invested. It is, in other words, what you’d expect from a Weezer album; a sign that whatever kept leading to mediocre records like Raditude has been worked out of frontman Rivers Cuomo’s system.

Weezer’s been on a course corrective for their last like, five albums, but for the sake of time, let’s look at what’s different between The White Album and Everything Will Be Alright In the End, since there’s only a year and a half between them, and these are the two people seem to agree work the best as correctives (Hurley, sadly, remains underrated). The two start in the same place as loosely conceptual pop rock albums, but they diverge in presentation. EWBAITE was devoted to appeasing Weezer diehards who’d been put off by the band’s most recent string of albums. This devotion wasn’t just part of the narrative tucked away in Rolling Stone profiles, though, it was literally the album’s creative thrust: lead single “Back to the Shack” states the band’s back to “Rocking out like it’s ’94” (“Back to the Shack” is also the album’s lousiest song). Cuomo is still actively mining his own back catalog on TWA, but in a way that feels more like a logical continuation of Weezer’s sound and less like a retread.

For example, The Beach Boys have been a Weezer influence since day one, but they’ve never done something like “(Girl We Got A) Good Thing.” The song starts with a polished guitar line, jingling bells, and a multi-tracked swooning melody all straight out of Pet Sounds, but there’s enough Weezer woven into the song’s explosive energy and dueling guitar hero solo that it doesn’t feel like pastiche, and instead is an album highlight. Elsewhere on other standout “King of the World,” the band’s able to flex some Maladroit-style riffing into a surprisingly endearing love song Cuomo wrote for his wife that succeeds in spite of the “Rivers, what the fuck?” lyric “Your mom locked you in a shed/And Uncle Sam dropped an atom bomb.” The White Album‘s best song, “LA Girlz” stays in the vintage Weezer lane musically, but the lyrical flip of this romance being uncertain and confusing is a nice inversion of a band whose lyrics usually spit venom or go for lobotomized happiness. And while I know it seems like a low bar to praise a band in their third damn decade for some sort of romantic nuance in their writing, considering Weezer’s pretty directly responsible for the “ugh, girls” branch of emo, it feels like progress.

In fact, The White Album works lyrically because so many of these songs have that melancholy or desperate edge to them. This is Weezer’s self-conscious “California beach music” album (just in case they fooled anyone with that cover art), but Cuomo also knows he’s 45 and married and famous for recording earnest records, so he can’t just sit back and rewrite “Island in the Sun” a bunch of times. Instead, he’s gone for a deliberately escapist record here where the worries and the woes are never truly out of the rearview; opener “California Kids” is about the joy of being up all night with those kids, but it also invokes sinking ships and rigor mortis. Meanwhile, “Do You Wannna Get High?” poses getting high by the beach as a threat more than a thrill. “Island in the Sun” eventually comes up when Cuomo repurposes those “Hey, hey”s for closer “Endless Bummer,” where our king of the beach protagonist, dejected because the girl he liked is over him and he left his headphones in her car, pleads for this summer to finally fucking end. The song still goes for a big rock band finish, but it’s less a big cathartic send-off than someone taking in the sights at the surf one last time before resigning themselves to leave.

That’s not to say The White Album isn’t without its problems, though. Like “Memories” from Hurley and “Back to the Shack” on EWBAITE, TWA’s lead single “Thank God For Girls” is a mostly terrible kinda-jokey-kinda-not single that seems to occur at least once per Weezer record since “Beverly Hills.” The album doesn’t exactly start firing on all cylinders right away, either: “California Kids” and “Wind In Our Sails” aren’t bad, but they’re largely uninteresting, by-numbers Weezer tunes, and the high of “(Girl We Got a) Good Thing” is canceled out immediately by “Thank God For Girls.” On one hand, the record’s brisk runtime means it doesn’t have time to lose its flavor, but it also doesn’t leave any room for filler. Cuomo still drops the occasionally stilted lyric, as well: there’s the aforementioned “atom bomb” lyric, and “Paranoid Android” gets a left-field name drop, among other bizarre choices. And, if Weezer’s brand of zonked out power-pop/alternative rock hasn’t won you over already, nothing here–save maybe the gleefully angsty piano and falsetto number “Jacked Up”– is going to change that. At this point, the band’s less concerned about making new fans than keeping the old ones.

But damn if The White Album isn’t a good argument to stick around. It’s a solidly enjoyable record of Weezer being Weezer (mostly) hang-up free. If Everything Will Be Alright In the End was the argument that Cuomo could make a good record with his back against the wall, The White Album is a statement of intent that he and the rest of the band are here to stay. And, for once, the fans may want them to.

I enjoy music and music culture; I hope you do, too.
View all posts by bgibs122 →
This entry was posted in Album Reviews and tagged album, alternative rock, music, power pop, review, self-titled, The White Album, Weezer. Bookmark the permalink.