You Should See Them Live: Alice in Chains at Taft Theater in Cincinnati

I would love to see 15 year old me’s reaction if I told him he’d go on to see one of his favorite bands live, mostly because I don’t think he’d believe me. He definitely wouldn’t believe that they came to Cincinnati and played in a sit down venue with nice carpet. He wouldn’t believe he would make a week-before choice to go. He wouldn’t believe that he would make small talk with two dudes from Dayton who sat next to him, and lamented he wasn’t a woman with big boobs. He’d probably believe that he agreed with one of those guys during small talk when he said that seeing Alice in Chains was a bit of a bucket list item because who knows much longer they’d be touring. He would jump at the chance to see Alice in Chains; he’d probably be real excited, but not before asking “Wait, how?”

A quick history: Alice in Chains a grunge band of the early ‘90s, were thought to have ceded Last Grunge Band Standing to Pearl Jam in 2002 after lead singer Layne Staley died of a drug overdose. While Staley’s death was devastating, it was a grimly logical conclusion for a band for where 80% of their discography (conservative estimate) was about junkie fatalism. You don’t hear something like “Would?”, “Nutshell”, or “Dirt” and think happy ending. Staley had functionally exited Alice in Chains in 1996 or 1997, and starring down nearly a decade of inactivity, the remaining members reunited in 2005 for some tour dates with guest vocalists before solidifying their line-up Comes with the Fall singer William DuVall in 2006. The reformed AiC put out a solid record in 2009 (I still remember buying it on its fittingly gloomy looking release day), another in 2013, and tours steadily on the concert hall and rock festival circuits.

If they play your town, I suggest you see Alice in Chains, not just because they sound great, but because history has made them a strange creature. Any other member of grunge’s big four–Nirvana, Pearl Jam, and Soundgarden–wouldn’t have survived losing their singer (I’m already praying that Eddie Vedder is secretly immortal), but Alice soldiered on in large part because of guitarist Jerry Cantrell. Not only is Cantrell the band’s chief musical architect, but he split lyric duty with Staley about 40%-60% depending on the album, and his haunted, Southern Rock harmonies and backing vocals are AiC trademarks. Years back, I was reading something about them online somewhere, and the author suggested that had Cantrell died instead of Staley, the band would have broken up. I’m not sure I agree with that argument, but I definitely understand it.

The best part of seeing Alice in Chains, though, is DuVall. It’s actually kind of hard to take your eyes off him. Not only is he effortlessly charismatic, but he’s up there giving 110% the whole time. He leans into the mic stand, he high fives and daps people in the front row, he goofs off with other bandmates, he shakes his hips and jumps around during instrumental breaks. And none of it looks contrite or like a pose; instead it just naturally looks like how dude performs. He was an energetic, afro-ed, rock and roll wailer having a blast on stage, and fuck, if he’s getting into it, so should the rest of us.

It’s interesting because on stage, DuVall is the most striking part of the show, and then you measure that against the fact that any conversation about Alice with even a little depth will mention Staley first every time (hell, this piece even does it!). The best comments about DuVall from fans usually amount to “He actually sounds pretty good” while the worst paint him with the same brush as Sublime With Rome or Arnel Pineda-era Journey: a sound-alike stand-in so the original members can keep the dream–and name–alive to the tune of $47 for the cheap seats. Actually, no, the worst comments are the racist ones. Anyway, whether he’s being praised or not, the implication is always that DuVall can’t touch Staley.

Sitting in a balcony seat while the band tore through “We Die Young”, this seems kinda fair, but mostly not. On one hand, the deference to Staley is understandable because DuVall wouldn’t have this gig if Staley hadn’t written something like “Man in the Box” that put the band on MTV. On the other, DuVall is close to matching Staley for years active in Alice, has sang late-Staley period songs like “Again” more than he did, and won’t do anything like force the band drop out of a tour supporting the world’s most popular metal act. And not only does he match Staley as a singer, but he has vocal control that Staley never developed, especially on the higher end of his range. You could hear him reach on something like the final chorus to “Man in the Box” but reaching or not, he was still singing the fuck out of each note, whereas Staley tended toward brute force and screams if he needed extra oomph (sidenote: Something I’ve never seen mentioned in the “DuVall can’t touch Layne” argument is that DuVall is in his late 40s essentially competing with Staley in the vocal prime of his early-to-mid 20s; the two’s birthdays are weeks apart. DuVall sounds healthy today, while Staley had noticeable wear and tear by 1996, although that was probably because of the heroin.) 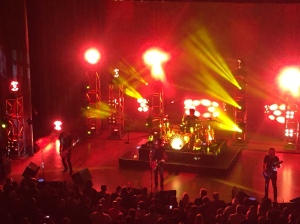 But exactly none of this background or handwringing came up while the band was on stage. In fact, I was most interested in seeing how much of the new stuff came out, and they lead with new album opener “Hollow.” Only one other The Devil Put Dinosaurs Here song came out–groove-heavy single “Stone”–and a trio of songs from Black Gives Way to Blue rounded out the Alice 2.0 songs in the setlist. I had kind of hoped to hear another newer song or two because I like how this band’s evolved. Alice in Chains were always the heaviest and least ~grunge~ of the Big Four, and they’ve actually gotten heavier with time. Cantrell’s developed the ability to take these grinding, lurching, hewn-from-stone riffs in the vein of “Dam That River” and made them his main form of attack while rhythm section Mike Inez and Sean Kinney form a potent low-end. Meanwhile, DuVall and Cantrell are practically co-leading vocalists boasting meticulous, off-kilter harmonies more intricate than most of the band’s older material (“Stone” and “Check My Brain” show everything great about this approach in action). “Stone” was great to hear, as was personal favorite “Last Of My Kind” where DuVall really gets to shine on lead.

Meanwhile, the classics are classics for a reason. Just about all of the band’s hits from ‘90 to ‘94 came out, including “Man in the Box,” “Them Bones,” “We Die Young,” “Angry Chair,” and “Got Me Wrong.” I’ve always thought Alice in Chains had the weakest album roster of the Big Four–a field with Superunknown, Nevermind, and Vs. is just hideously stacked, even against something as good as Dirt–but in terms of who has the most great songs, they can go pound for pound. The rockers, all brute strength leveled with the gut dread of drug withdrawal, remain powerful, but it was the softer stuff that surprised me. “Nutshell” is quietly the grunge era’s best ballad by a Seattle mile, and “Down in a Hole” proves that Alice can be melodic as anyone else. Cantrell, Inez, and Kinney have had these songs for 20 years, and still make’em sound fresh (I realize I haven’t said much about them as performers, so here goes: Inez was only behind DuVall in terms of “fun had on-stage,” rocking out with his long curls. Kinney had that weird but reassuring thing as a drummer where he doesn’t age. Cantrell was sporting a beard, which made him look like pre-Super Soldier serum Zakk Wylde). I’ve never especially liked “Rooster” and “No Excuses,” the first two songs of the encore, but when the band finished with “Would?” I knew I’d made the right call to go.

Buzz has it that there’s a new Alice in Chains album in the pipeline, and after seeing them live, I’m definitely looking forward to it. This is a band with tons of chemistry and chops, and great songs old and new. Honestly, I’ve been on a bit of a rock kick lately, and so this was a right time, right place fit. If I told 15 year old me could have seen them, he would have been excited, surprised, and confused, but he wouldn’t have been let down.