Jay-Z – 4:44
It’s fun to think about how much has changed since “Of course sometimes shit go down when it’s a billion dollars in an elevator.” In the 3 years since that bar, everyone involved has seen their stock rise or fall: Beyonce has only traded higher, Solange earned her seat at the table and the top of the festival bill, and Jay-Z…well, someone had to experience a downturn, right? A year has passed since Lemonade and it’s “Oh my God, Jay-Z cheated on Beyonce” flashpoint, and Hov’s spent most of it flustered, if not apologetic, alluding to some sort of eventual response.

4:44 isn’t a response to Lemonade exactly, but it also isn’t not a response to it. The record’s concept is more “Jay-Z in winter,” with Jay talking about his infidelity as well as the consequences of his past, his struggles, and how he sees rap and Black wealth discussed in the culture. Infidelity aside, this is a more musically restrained version of his Watch the Throne talk, and more engaging than Magna Carta, Holy Grail. While narrower in scope than Lemonade (“Oh my God, Jay-Z cheated on Beyonce” was its flashpoint, but that record was so much more), 4:44 is the most unguarded and honest that Jay-Z’s ever gotten, and at times where he’s keyed in like on “Smile,” it’s entirely compelling and more than a little moving. No small part of that is due to No I.D.’s production, which goes heavy on soul samples for beats that are stately and surprisingly emotive; I realize it’s practically a rap cliche to say you’d listen to nothing but the instrumentals, but on 4:44, I swear it’s true.

A part of that could be that 4:44 feels pretty medicinal as a listen. It’s an interesting cultural artifact, it’s well-made top to bottom, and you get as good a look into Jay’s head as you’ll ever get (including a bone-headed line about Jewish people’s credit and a few “That’s not how biology works” bars), but I’m not sure about its shelf life as An Album To Be Listened To. It feels like Jay-Z’s Bridge of Spies or War Horse, a new work by an old master whose informed prestige makes me feel like I’m taking its existence for granted, even though I’m not sure how much I’ll revisit the whole thing (“Smile,” “Family Feud,” and that one line aside, “The Story of O.J.” are the keepers here). Still, though, as an intellectual curiosity and an exercise in name clearing, 4:44 works more than it doesn’t. 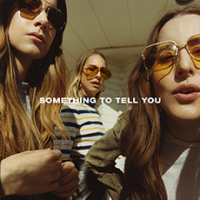 Haim – Something to Tell You
People love synchrony. There’s something in us wired to go off when we see or hear all the little pieces of something operating in tandem. You can see this in virtually anything off Michael Jackson’s first two albums. You can see it in how a wedding dance floor opens up during “Uptown Funk!” You can see it in the first six minutes of Baby Driver. You can see it in Haim’s debut Days Are Gone, a 2013 record that smartly cross pollinated indie pop, soft rock, and R&B. Even if I appreciated that album more than I outright liked it, it was still hard to deny the craftsmanship that went into a song like “Honey and I,” where every instrument and melodic flush build toward something.

The same can’t be said for follow-up record Something To Tell You, where Haim’s efforts to avoid the sophomore slump are exactly what bring them there. The 4 year wait between albums was allegedly due to writer’s block, and listening to how these songs strain for effortlessness, writer’s block is believable. Things click into place on “Nothing’s Wrong,” the swirl of Lindsey Buckingham-esque guitars on “You Never Knew,” and stomper “Kept Me Crying,” but overall, these songs are too overloaded with excessive instrumentation, pitched down vocals, and “look ma, no hands” studio tricks to work as the tossed off pop songs they aspire to be. The resulting effect is like watching someone try to act casual with too many accessories. A song like “Little of Your Love” encapsulates the pros and cons of Something to Tell You: it grabs from a handful of classic styles for something catchy and fun at first, but the repetitive chorus overstays its welcome, and any musical pleasantness is ultimately canceled out by flimsy songwriting. And more than the load-bearing production, it’s the lyrics that really sink the album. Haim write almost exclusively about relationships, doing so in a way that emphasizes their universality while–and this is key–still leaving room for the listener to project their experiences into the situation. That last essential part is what’s missing from Something To Tell You, whose lyrics about wanting you back or being ready for you or getting over you are so generic that it’s hard to believe they’re about an actual person, and not a particularly delicious baked good.

To be fair, Something To Tell You isn’t so much a disaster as much as it is Days Are Gone without getting the formula right. The multi-genre roulette is still in place, but instead of intricate placement, Haim sound like they’re tossing out every idea in hopes that one percussion track, guitar riff, or piano sequence of three will stick, and little of the album gels like it wants to. The result is underwhelming, and more than a little wheel-spinning. In that regard, Something To Tell You, with its constant promise of excitement teased but never delivered, is perfectly named.

Japanese Breakfast – Soft Sounds from a Another Planet
Japanese Breakfast (Michelle Zauner)’s follow-up to last year’s debut album Psychopomp, is a fantastic study in indie rock textures and genre-blending. Part of ‘10s indie is what you do with everything else; an artist’s choice to embrace/shun pop or electronic flourishes ends up saying just as much about the artist as an interview with Spin will, and Soft Sounds From a Another Planet is a near idealized version of indie rock that incorporates an array of sounds while still holding its core identity together.

Of course, it helps that these are just killer songs.. Zauner knows how to meld her bright voice into the spacey atmospherics of her music to great effect; she sounds equally great over guitar-squally rockers (“12 Steps”) as she does humid indie pop (“Road Head”) and songs that split the difference (“Body Is a Blade”). The opening 3 song suite of “Diving Woman,” “Road Head,” and “Machinist” near perfectly captures the album’s appeal: here, you have expansive, soft-touch shoegaze; nighttime, hip-hop filtered indie-pop; and an electronic, synthy AutoTuned banger; and that’s just the first 13 minutes. It makes for an ideal jumping point to the album’s more dramatic, airier middle section, and the intimate finish with mental health lament “Till Death” and “This House”’s acoustic strum.

The most immediate counterpart to Japanese Breakfast, in my mind, is Microcastle-era Deerhunter. Like Bradford Cox and company, Zauner wraps her version of indie rock in gauzy reverb for an end result that’s human, but very far away. But where they go with that humanity is what makes them different. Deerhunter’s humanity retreats within itself in a dissociative or depersonalized fashion, while J.Brekkie’s is, yeah, shot into space, but clear-eyed, and still full of longing, yearning, and more than a little horny. Microcastle’s first full song is called “Agoraphobia,” or the fear of open spaces, while “‘Till Death”–Soft Sounds…’s last full song–ends with a croon of “Thanatophobia,” or the fear of death, meaning how they handle other people is a point of divergence; one is afraid of everyone else, the other caps off a celebration of someone being with you through your illnesses and fears. Grappling with yourself and others, in either case, rarely sounds this good. 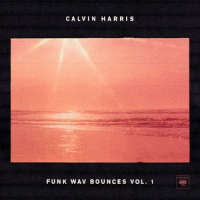 We’ve had these things since the EDM/David Guetta explosion around the turn of the decade (Guetta’s 2009 One Love record–the one with “Sexy Bitch”–is the breakthrough effort), and the most that’s ever come from them is like, maybe “Titanium” or “Sweet Nothing.” You might get a flash of inspiration, or something like “Without You” that just works, but mostly, these projects act as places for Big Sean or whoever to fire off whatever’s lived in the Drafts folder for too long.

Which is why it’s surprising that Funk Wav Bounces Vol 1 is a near-great record, albeit with some caveats. It owes most of its overall quality to 4 stone cold killers: opening trio of “Slide,” “Cash Out,” and “Heatstroke,” and then late arrival “Feels,” all of which work way goddamn better than they deserve to. The whole album is covered in tight if kinda cheesy throwback grooves, with ScHoolboy Q, PARTYNEXTDOOR, and D.R.A.M all coming through the ultra smooth “Cash Out,” while Pharrell struts, Ariana Grande coos, and Young Thug is even more delightfully yelpy than usual on “Heatstroke.” Pharrell brings a Stevie Wonder impression that somehow actually compliments Katy Perry’s Gwen Stefani one on “Feels,” a song that’s more compelling than most of Witness (Big Sean brings a verse that probably didn’t deserve to waste away in Drafts to “Feels,” as well). But it’s “Slide,” which might actually be my song of the year, that alone makes Funk Wav Bounces Vol. 1 worth it on its own. Over Harris’ most sublime production, Frank Ocean turns in one of his most approachable performances possibly ever, and Quavo and Offset’s verses are the perfect balance of summer fun and Migos’ de facto darker sound. I’ve listened to this song almost every day since its February release, and still find things to like about it.

Bolstered by those 4, the rest of FWBV1 can’t help but feel slight. “Rollin” with Future and R&B newcomer Khalid would be a highlight on almost any of the other DJ records; here it’s just okay. Nicki Minaj and Travis Scott have serviceable numbers, and if you want to hear what in the pocket Snoop Dogg sounds like on a song where John Legend sings, well, you’ll probably listen to “Holiday” at least once. The record ends on a pair of stumbles; Kehlani and Lil Yachty’s “Faking It” is the only real miss here, and closer “Hard to Love” with Jessie Reyez is nice, but out of step with the rest of the record. Weird enough, FWBV1 feels like something tailored to streaming services for when you’re having people over or just want “summer music” on: it’s light, brief, and hilariously front-loaded. It’s good now, but will probably get swept up once the Chill Fall playlists make the rounds, but who knows, Calvin Harris might have something ready for that, too.

I enjoy music and music culture; I hope you do, too.
View all posts by bgibs122 →
This entry was posted in Album Reviews. Bookmark the permalink.