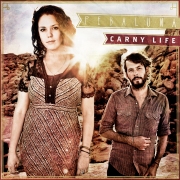 Pebaluna bill themselves as a collective as opposed to a band. And, while I’ve heard “collective” used as shorthand for, “Yeah, none of us really know who does what”, the description fits Pebaluna to a tee. Carny Life is a free-flowing record that takes its turns naturally and easily, a tone no doubt bolstered by its almost exclusively acoustic instrumentation. It’s the work of a collective: there is always a direction, but many hands guiding the way.

The opening duo of “All Falling Down” and “No, I Can’t” exemplify this with ringing clarity. “All Falling Down” begins simply enough as a jazz-chord dominated number before switching time-signatures and introducing a spiraling bassline, then jumps right back into common time. It also makes a deft transition into a surprisingly hard hitting chorus, and is a great start to the album. “No, I Can’t”, covered before, still has that soulful swing and slow build that made it delightful the first time.

The quickie genre description of Pebaluna would peg them somewhere between “indie folk” and “indie country”, but even those are a little off the mark. Such a description fits “Sister Sara” or the soothing “Baby What’s Wrong”, but miss the ruckus of the album’s back half. The folk/country set up is there; Pebaluna is founded on acoustic and electric guitars, bass, and drums, and horns and fiddles zigzag through Carny Life, but the collective jumps through stylistic hoops, too. Utter standout “Hopeless” has all the fire of an old Motown cut, while “No, I Can’t” dabbles in ukulele heavy R&B. Not exactly what you’d expect from a label like “indie folk”.

One easy thing to notice about Pebaluna’s influences is that there’s a lack of modernity to them. It’s hard to argue there, but the group doesn’t honestly seem to have a need for them. If they feel like a relaxed vintage-country number with a pleasant bob to its melody (the title track), then they go for it. If they feel like a frantic, drum-heavy tune with a guitar solo and gospel influences, they’ve got a “Please Me” for that. What’s more is that even with the older influences and inspiration, Carny Life never sounds dated or gimmickly throwback. It sounds natural.

This affinity is in no small part due to vocalist Lauren Coleman. A talented and trained singer, Coleman always sounds sure of herself, and performs with confidence. She’s also nuanced, and able to play to any song’s mood. She’s sweet on the album’s calmer songs, but there’s also plenty of fun to be had hearing her cut loose on tracks like “Please Me” and “Honey”; songs that play out to the back of the room. Her lyrics are those of Americana; heart-break, despair, hope, and fun. Carny Life favors a narrative lyrical style that paints detailed pictures of a particular slice of life.

The most glaring flaw to Carny Life is how heavily it stacks its second half. After making a great first impression with “All Falling Down” and “No, I Can’t”, the next three songs downshift the collective’s energy and focus more on craft and mood. Each composition is well done, but hearing the three midtempo songs in succession bleeds their edges, and douses some of the album’s fire. From “Honey” onward, the group’s firing on all cylinders (even “Siren Song” has some forward motion by way of its murky instrumentation) until the warm ukulele singalong of “Sunshine Lullaby”.

Carny Life clocks in at 35 minutes, and gets plenty of mileage out of each one. Some sequencing issues aside, it’s a well put together record by a collective that’s exploring where they can go and how they can develop their sound. There are clear peaks, but few discernible lows, and I’d recommend this one to anybody looking for quality fall music.

Stay in touch with Pebaluna on their Facebook page, or check their store if you’re interested in buying Carny Life (also available on Spotify).

I enjoy music and music culture; I hope you do, too.
View all posts by bgibs122 →
This entry was posted in Album Reviews, New Music and tagged album, Carny Life, indie, new music, Pebaluna, review. Bookmark the permalink.