Hello, and welcome to Radio Rants.

We’ve got kind of an issue here today. One part due to Listmas, one part due to other reviews, and one part due to the charts holding onto the same handful songs for last three months, I’ve recently written about everyone in this week’s top ten already. “Hello”, “Stressed Out”, “Stitches”, and “Here” have all gotten individual treatment, and I just don’t have it in me to write about Meghan Trainor’s latest throwback track, or the shell game Bieber’s playing with “Where Are U Now?” again. So, even though she’s gotten recent coverage, bring on Selena. 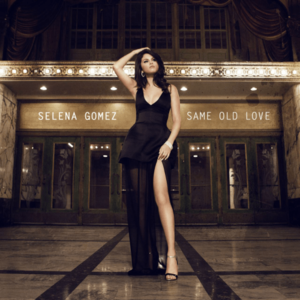 Selena Gomez has carved out a lane for herself one of our purest B-level pop artists. That’s not to say that she’s B-listed as a celebrity, but that her career highlights the difference between a pop artist and a pop star. This isn’t a bad thing. While she’s not doing Swiftian numbers, Gomez leveraged her Disney fame to start an adult pop career with five top ten hits over not quite three years. She’s done this without needing a career reset already like Bieber or (probably) Ariana Grande, and has a consistency that Demi Lovato and Nick Jonas haven’t been able to match. And this consistency is reflected in her singles: sometimes she soars, sometimes she whiffs, but it averages out to a potentially resilient career.

All of this makes her easy to appreciate, but means it can be hard to plumb her material for anything beyond “it’s fine.” We’re gonna try anyway. “Same Old Love” is Revival‘s second single following “Good For You”, and while it shares that song’s aspirations of doing you, that’s about all they have in common. “Good For You” was all hazy atmospherics, drum pads, and breathy vocals while “Same Old Love” is pared down to stabbing piano chords and programmed snaps for its foundation with Gomez singing with her chest all the way out. It manages to sound like it belongs on contemporary radio stations, but could have credibly gotten air play at any point in the last few years.

That’s likely due to veterans Stargate and Benny Blanco producing the track. “Same Old Love”‘s verses are made of the aforementioned piano chords and snaps, but the chorus tosses in some flourishes like upstroked guitar to match the piano parts, deep bass, and a synth line that I swear reminds me of an old N64 video game. Even with those extra touches, “Same Old Love” is scaled back from Stargate or Blanco’s usual efforts (Iggy Azalea’s “Black Widow” was another joint project), and the song stands out a bit on the radio as a result. Gomez isn’t trying to rule the charts so much as keep her place in them. The beat doesn’t get in the way, and that might be a problem; it’s fine as a composition, but feels like an outtake or a demo, like a grounding element’s missing.

Gomez’s performance only throws the sparse track in relief. Like I said, she’s singing here with more assurance and force than usual, throwing voice breaks and the slightest hint of a  bratty snarl into her delivery. She throws a little more into the chorus, and while it could be a little grating, a hint of attitude fits her well. The effect does her favors, but hurts the beat by pointing out how little there is to it. Actually, between the upstroke guitars, baby brat vocals, and overall off-kilter vibe, Gomez is doing a good to great Gwen Stefani impression.

She also gets an assist with an uncredited backing vocal from Charli “Huh, this crossover thing’s harder than it looks” XCX, who is also a credited writer. Charli contributes those “Ooh oh whoa oh whoa”s you hear on the chorus, and while it’s cool to hear her on a hit, it’s also really hard to differentiate her and Gomez if you’re not trying. A lot of that comes down to just how in Charli’s wheelhouse “Same Old Love” sounds; with a little extra dressing, it could have fit in on her album Sucker. As is, the song’s too slight to plausibly fit on that record, but considering that Sucker stiffed the charts, I’m not sure that’s necessarily a knock as far as Gomez is concerned. Let’s see some lyrics.

“Take away your things and go/You can’t take back what you said, I know/I’ve heard it all before, at least a million times/I’m not one to forget, you know” The argument’s floating around out there that “Same Old Love” is about Gomez’s famous former beau Justin Bieber, whose tried to rekindle what they had for a while–likewise, people think his “Sorry” and “Love Yourself” are about her. The official party line is that “Same Old Love”‘s about “negative love” and “not necessarily romantic”, so believe what you want.

“I’m so sick of that same old love/That shit, it tears me up” I get the impact that throwing “shit” in there has, especially for Gomez who still seems kinda like a kid, but I’m always confused when designer radio singles throw swear words in the chorus (aside from “Fuck You”. “Fuck You” is transcendent.)

“I’m so sick of that same old love/My body’s had enough” Taking “Your Love Is My Drug” to the logical limit, huh?

“I’m so sick of that same old love/feels like I’ve blown up boy” File this one under “lyrics that aren’t helping the Bieber conspiracy theorists”.

If you want to look at “Same Old Love” as a step forward, you can, but mostly it’s regulated to “it’s fine” status. It showcases Gomez being a little cocky, and more or less works due to the strength of the hook. It’s pop music at its most functional: “Same Old Love” is exactly as good and memorable as it needs to be for Gomez to huff it to her next single without leaving much in its wake. Bring on “Hands To Myself”.

I enjoy music and music culture; I hope you do, too.
View all posts by bgibs122 →
This entry was posted in Uncategorized and tagged Charli XCX, music, pop, review, Revival, Same Old Love, Selena Gomez. Bookmark the permalink.