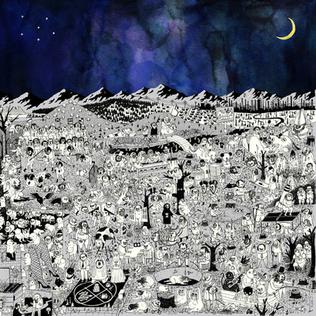 So goes the first lyric of Pure Comedy, and however deep you just sighed or heartily you chuckled is going to dictate how you feel about folk rocker Father John Misty’s newest work overall. Since making it to the alternative major league with 2015’s I Love You, Honeybear, Misty (who is really Josh Tillman but extra Father John Misty) has garnered a reputation as an acerbic indie rock provocateur whose irony-laced comments and interviews are as clever as they are insightful and self-aware. That character was up and down Honeybear, but since he made that album and 2012’s Fear Fun in relative obscurity, it wasn’t the main draw.

The same can’t be said about Pure Comedy, which pushes Father John Misty’s persona and philosophy, along with all of his worst traits, all the way to the front for a dispiriting, muddled album. It’s a project informed by Honeybear’s lousiest song, where lush but staid instrumentation and sleepy pacing aren’t able to support Misty’s sardonic commentary or hide the seams in his sometimes kidding/sometimes honest character/not character. The album is, in short, a lot, so this might take some digging.

You can’t get to what’s slippery and dissatisfied about Pure Comedy without first looking at what’s slippery and frustrating about Father John Misty. The core issue with the persona is that it sort of acts like a fog of war: by wrapping every statement, lyric, and move in a layer of smarmy, sarcastic, self-awareness, the listener has to calculate how ironic or sincere he’s being at any time. As it happens, the math usually shakes out to whichever is easiest on Misty in that moment. So you’re left wondering how many questionable decisions here be attributed to some sort of trollsy metagame, how much is in service of some oblique point about artistry, and what’s just poor decision making.

Like, okay, here’s an example. Pure Comedy is 75 minutes long. This length is a byproduct of ho-hum tempos and songs that are as overwritten as they are caustically doomsaying. Is this:

None of this would happen with any other artist, but I’ve seen people argue all three reasons out in the wild and it is exhausting. Well, welcome to Fog of Misty. It comes from the fact that he uses his self-awareness chiefly to defuse/preempt any criticism: his argument is that he explores other themes or topics as a way to process his inner-turmoil and neuroses, so when he eviscerates someone up and down in song (see: “Ballad of a Dying Man” here, “The Night Josh Tillman Came To Our Apartment” on Honeybear) he’s really just fucking around while saying all of that about himself, so anyone saying anything about him is really saying that about themselves, which means he wins because…he said it first? I don’t know, that part’s never been clear, just “I said that you hate me, so you hate you, I win.” And if you take this line of thought to its logical conclusion, you get a guy who believes he knows how wrong it all is, and if you don’t like it, then he’s proved how right he is because you hate him. You get Fred Durst with a masters degree. But, if you try to make sense of Misty’s logic, then you’re accused of either misreading him or not getting the joke that clearly he has no rhyme or reason, and fuck you for trying to understand it. This is what I mean by “whatever’s easiest:” if you write Misty off wholesale, then you lose because he anticipated it, but if you examine whatever the fuck that means, then you’re not getting that he has no point.

Which, getting to Pure Comedy, is such a fake out because Misty clearly has a point. The point of this album–stated in as many ways as possible–is that life is a bunch of happenstances daisy-chained together in a world that likely hates you, and any attempt to enforce your own narrative, epiphany, or belief system on it is hilarious. This view came to him, according to “Leaving LA,” as a kid, when he nearly choked to death in JC Penny while Fleetwood Mac played (assuming he’s being honest, there’s that Fog of Misty). I know every review says this, but “Leaving LA” is emblematic of Pure Comedy as a whole: there’s a fascinating essay/”Thread, 1/?” in the lyrics that cannot overcome the fact that it is a hellishly tedious 13 minute song with virtually no melodic invention or musical variety. If Misty’s your man, then you’ll love it, but otherwise it makes the go-forever AutoTune fade out of Kanye’s “Runaway” look measured by comparison.

The other thing that dulls the impact of “Leaving LA” is that it’s revelations end once the song does. There’s a lot of pathos there, but none of it gets revisited once the song peters out mid-thought. How hard would it be to tie some of the self-criticism from “Leaving LA” into “The Memo”’s bridge? There, Misty digitizes his voice to detach from his art, and includes robo-snippets saying “This guy just gets me” and “This is my song of the summer.” It’s a compelling moment as is–the listener’s forced to reckon with the fact that artists bare their souls on a track, and we’re like “Cool, lemme put that on the Chill Indie playlist”–but connecting it to “Leaving LA” would make both songs stronger. Really, for someone as smart and operating on a Grand Scale like Misty is on Pure Comedy, not leaving breadcrumbs back to “Leaving LA” is a key missed opportunity. It’d also do wonders for cohesion.

I realize this is granular detail, but it leads to Pure Comedy’s death by 1,000 cuts. Everything about this album’s rollout has signaled that Misty wants Pure Comedy to be his philosophical masterpiece and crowning artistic achievement, but saying that doesn’t make it so. It’s just not a conceptually sound enough record for it. And like…okay, I legitimately feel like a dick saying this, but we can agree that the cultural commentary here isn’t that deep, right? Don’t get me wrong, Misty can write clever one-liners like the best of them (look at the sheer economy in “Bedding Taylor Swift every night inside the Oculus Rift”), but underneath those zingers are fairly boilerplate observations. “Put your phone down.” “Buzzwords and social constructs, right guys?” “Anyone can commercialize art.” “Live, laugh, love.” It’s 75 minutes of those “Whoa, makes you think” Banksy-lite viral posts that make the rounds. It’s trite commentary being treated as, in the album’s own words, “sacred text.”

I Love You, Honeybear tossed barbs about romance in every direction, but did so as a reaction to Misty trying to outrun his own emotions and sentimentality. That run culminates in “Holy Shit,” where he riffs on society’s absurdities before declaring to his wife “Maybe love is just an economy based on resource scarcity/But what I fail to see is what that’s gotta do with you and me” in a moment of vulnerability and surrender regardless of how illogical love is. He completely pulls off the twist because it matches the album’s emotional beats, and follows the personal stakes throughout (also not hurting things: “Holy Shit” is quite possibly Father John Misty’s best song).

Pure Comedy tries something similar with “In Twenty Years Or So,” where after 70 minutes of cantankerousness, he surmises that well, we’re supposed to blow each other up in 20 years, so you might as well treat getting a drink with someone special like it’s “a miracle to be alive” and that “There’s nothing left to fear.” It’s supposed to be another twist ending, but it feels like a cop-out. Misty spends too long making too damning a case against this cruel planet of Earth for one last-minute reversal, an early tossed-off lyric, and a sleepy number about his wife to walk back everything back. He sounds far more gleeful and convincing calling humans “demented monkeys” and Earth “This godless rock that refuses to die” than giving a reason to go on. And again, Fog of Misty bites him in the ass here; it’s totally possible to read “In Twenty Years Or So” as a preemptive “Well, actually” against criticism calling the album a downer.

Ironically for an album that’s ostensibly about humanity, that’s what’s missing from Pure Comedy. The album’s best song is easily the one that sounds like it involves actual people, “Things That Would Have Been Helpful to Know Before the Revolution.” It’s still probably too long, but the melody’s nice, the chords are inventive, and most importantly, it’s lyrics connect. “…Before the Revolution” paints a vivid picture about life after the end told by someone living there, waiting for new technology to develop, and Misty sells the shit out of it with a weary vocal performance. It’s about mankind through the eyes of man. Pure Comedy needs more songs like that, and less po-faced pondering like “Two Wildly Different Perspectives.” That song, like, most of the album, is Misty talking at you instead of to or with you; he’s here to tell you that he alone sees through Them and the bullshit They’ve sold you.

I listen to Pure Comedy, and I think of Jeff Rosenstock’s WORRY. from last year. Like Misty, Rosenstock is a music lifer who happened into success his career’s second decade, and whose most recent album is very much an Album For Our Times. The biggest philosophical difference is that Misty’s lyrics have a sense of above-it-all remove, while Rosenstock’s anti-commercialist “Festival Song” leads with “It feels completely ridiculous/That I’m a willing participant,” putting him right there with us. Both albums run with the undercurrent of “We’refuckedwe’refuckedwe’refucked” but WORRY’s concerned about how day-to-day life actually feels, while Pure Comedy is worried about “the soul of humanity” on such a massive scale that it doesn’t involve, y’know, people. It’s an album that, by its own admission, could use some.

So yeah, Pure Comedy. I don’t know. It’s not entirely without charms: “Things That Would Have Been Helpful to Know Before the Revolution” is great, the title track and “Total Entertainment Forever” are lively enough, and “So I’m Growing Old on Magic Mountain” has an extended Sea Change-esque outro that’s lovely. Tillman sounds better here vocally than he has ever, and the arrangements are overtly very nice even when they have a negative BPM–but this isn’t a record that I can see myself coming back to.The cutting sarcasm and earnest reflection that worked in concert on I Love You, Honeybear are at war here, and you’re left with a sprawling, messy album that trips over itself and lays bare the headaches of its creator while being such a joyless listen that it’s not worth the aggravation in the end. The biggest joke of Pure Comedy is the amount of time and thought I’ve put into it. Somewhere, Misty laughs.